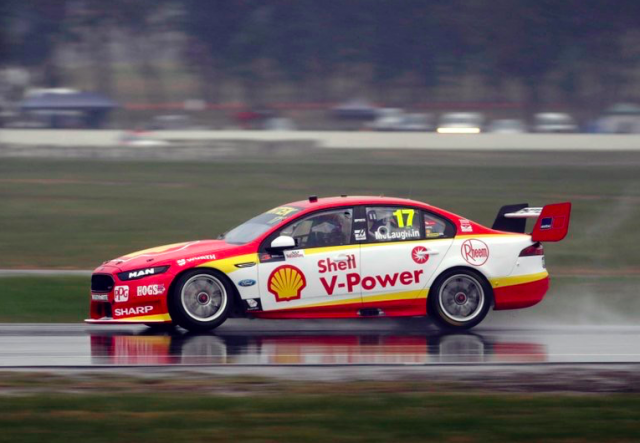 The slippery track surface tested the field to the limit with drivers describing the track as like driving on ‘ice’.

As a result, a group of cars endured wild off-track excursions including pace-setter McLaughlin.

The DJR Team Penske driver was able to post a benchmark 1:43.36s, which proved to be 0.3s faster than Nissan Motorsport’s Todd Kelly, who topped the times for the majority of the 45 minute session. 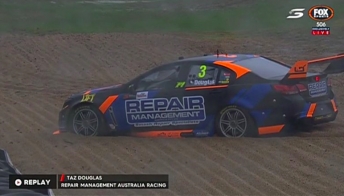 Taz Douglas caused the only red flag in the session

“At the end there, it was sketchy,” said McLaughlin.

“Going down the front straight, I was aquaplaning from the last corner all the way down to Turn 3.

“I just told Ludo (Lacroix) to bring it in. I know the car was okay so I just don’t want to get any dents on it.”

The opening 10 minutes of the session were littered with incidents, the most notable involving Brad Jones Racing’s Nick Percat and Mobil 1 HSV Racing’s Scott Pye.

Percat lost control of his Holden on the entry to Turn 1 before clattering into the rear of Pye.

Both cars were sent spinning off the road resulting in significant damage to rear on Pye’s chassis, which forced him on the sidelines for the remainder of the session.

Percat was able to return to the track before ending the session seventh behind Fabian Coulthard.

Chaz Mostert also suffered damage to the rear of his Prodrive Falcon from DJRTP’s Coulthard early in running, which forced the former back to the garage.

Meanwhile, Rullo was lucky to escape a major high speed off at Turn 1 in the Lucas Dumbrell Motorsport Holden.

McLaughlin (DJR Team Penske) ran wide at the penultimate corner, while David Reynolds (Erebus Motorsport) had a moment at Turn 10 in the opening minutes.

The top 10 was rounded out by Tim Slade and Holdsworth while Garth Tander slotted into 11th ahead of Jamie Whincup and Mark Winterbottom.

Shae Davies, who topped the additional driver practice session, was the top wildcard entry in 22nd position ahead of James Golding in 23rd while Macauley Jones was 28th.

The field will regroup for another 45 minute practice session at 1440 local time.