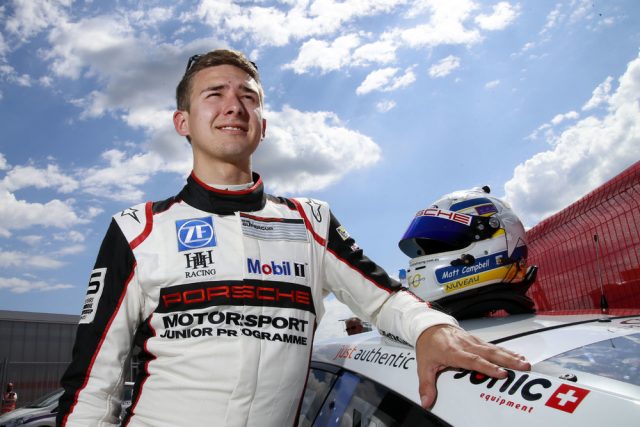 The rising Australian star announced himself on the world stage by claiming two pole positions followed by a fifth and a third in the hotly contested Porsche series.

As result, he became the first Australian to claim a podium finish in the series since Alex Davison at Indianapolis in 2002.

The reigning Carrera Cup Australia champion has secured a spot on the grid after winning a Porsche scholarship, which has seen him inducted into the German marque’s coveted junior driver development program.

Alongside his Porsche graduation, the 22-year-old is set to be thrust into the Virgin Australia Supercars Championship title battle when he partners reigning champion Shane van Gisbergen at Triple Eight for the Pirtek Enduro Cup.

The Queenslander will be a notable absentee from today’s co-driver practice session at the Winton Super Sprint as he prepares for next week’s Supercup showpiece in Monaco. 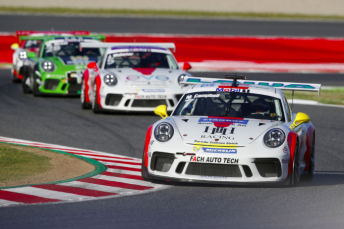 Campbell impressed on his Supercup debut at Barcelona

Reflecting on his achievement, the former McElrea Racing driver says his goals for the season remain unchanged.

“I’m still not thinking about the championship as it is such a long season,” Campbell told Speedcafe.com.

“Even one simple DNF can ruin any hopes of the championship.

“I’m treating it race by race and I still don’t have any expectations going forward. Obviously we would like to continue our pace.

“This is my first year and I’m just enjoying the opportunity and very grateful for it all.

“I didn’t really have any expectations of any certain results in particular, I just went into the weekend giving it my best shot.

“To come away with two poles, a fifth and a third was fantastic and I couldn’t be happier it was obviously above and beyond my expectations.

“We didn’t really expect that (0.3s gap to Ammermuller in qualifying). Qualifying is one of my strengths but I didn’t expect to be up there. I would have been happy with a top five result.

“To be able to come way with a podium is great start to the relationship with Porsche.”

The race meeting saw Campbell experience a European Formula 1 event for the first time which he shared with his former team boss Andy McElrea, who made the trip over.

“It was quite a lot different to what we have in Australia,” he added.

“There was F2 and GP3 there, so it was quite a different fan base, and it was cool to be a part of.

“It was fantastic to have Andy, his wife and a few of the other McElrea guys over, who have been an integral part of my story so far.”

Campbell will face the unique Monaco streets in the second round of the Porsche Supercup series next weekend.