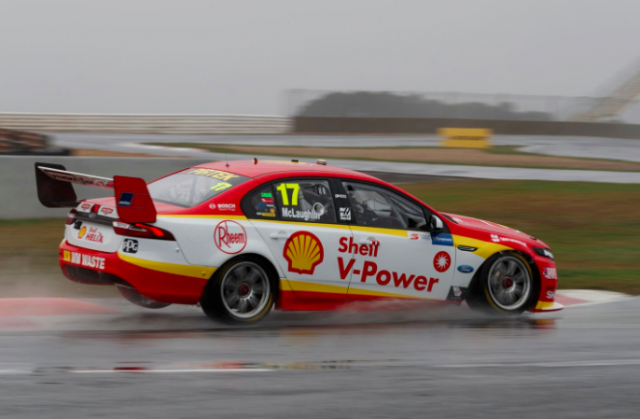 Forecasted rain will level the Supercars playing field at Winton this weekend, according to DJR Team Penske’s Scott McLaughlin.

Fresh from two wins at the previous round at Barbagallo in Perth, McLaughlin heads into the weekend with good momentum, lying fourth in the championship standings.

However, inclement weather expected to hit the rural Victorian circuit on Friday appears set to throw another challenge into the mix for Supercars teams.

“It’s going to be a different weekend with a bit of rain around,” McLaughlin told Speedcafe.com.

“We were quick in the rain at Symmons Plains, so hopefully we can carry that on for this weekend.

“Obviously limited dry running if it does rain all day tomorrow does make it difficult.

“It’s the same for everyone and we’ll just have to adapt to it as best we can.”

McLaughlin believes his DJR Team Penske squad is at a disadvantage, owing to the fact Winton is the Victorian-based teams’ test track.

“We’re confident that the car should be there or thereabouts in the window, but we are coming in a little bit less of an advantage compared to the Victorian teams,” he added.

“Our main aim is just to stay consistent and I mean if we finish in the top five; two top fives will be fantastic for us, especially at a track that is not our test track.

“Hopefully when we put the car on the track, like it has been everywhere, will be fast.”

The Winton Super Sprint will begin with a 30 minute co-driver practice session at 1050 before Practice 1 at 1235 local time.