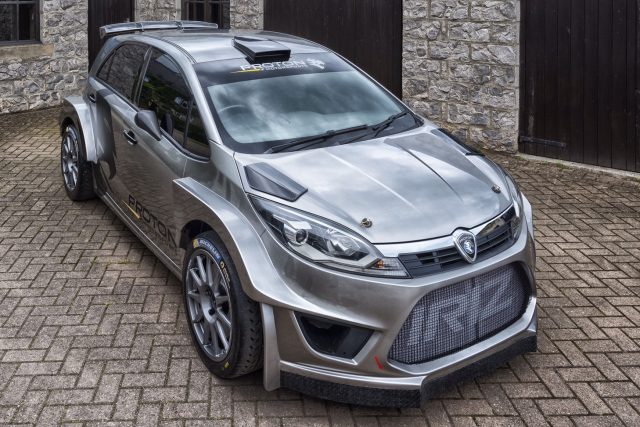 Proton is expected to return to the World Rally Championship next year with a brand new Iriz R5 rally car.

The Iriz, built by British firm MEM, is set to contest the WRC2 category alongside a tilt in the Asian Pacific Rally Championship.

Proton’s new rally weapon is likely to break cover at next month’s Goodwood Festival of Speed.

The Malaysian manufacturer’s previous rally program ended four years ago when production of the Satria Neo base car ceased.

Chris Mellors’ MEM firm was also behind the Satria project, which scored a podium in the Intercontinental Rally Challenge, won in the WRC’s old Super 2000 class and was a title-winner in the Asia-Pacific series.

“We started looking at this with Proton last year and straight away we were excited by what we saw with the road car,” said Mellors.

“The size and shape of the Iriz is perfect for rallying.

“Everything is in the right place: the overall length of the car is shorter than the Satria, but the wheelbase is longer; the strut tops are in just the right place; there’s lots of frontal area which is great for cooling.

“We’ve got a great base car and into that we’ve put all the right ingredients.

“The engine’s fabulous: really powerful and light. It’s the [Mitsubishi Lancer] Evo X engine taken down to 1600cc – a process that will help make it even stronger than it is.

“The ingredients in this car are absolutely all there – we’ve put everything into it and with those component parts we’re going to have one heck of an R5 car.”

The Iriz R5, which will be available in both left and right-hand drive, is set for a January 1 homologation.