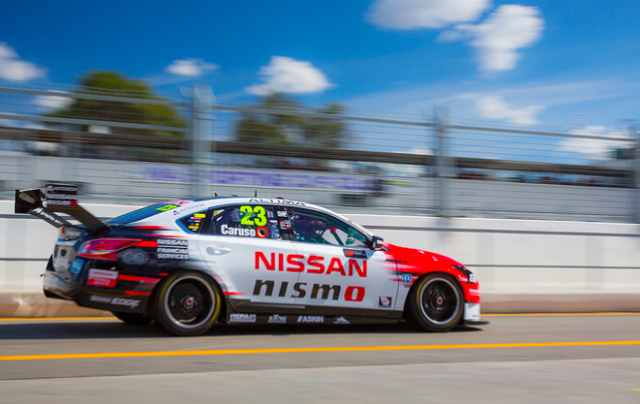 Nissan Motorsport is hoping this weekend’s Winton Super Sprint will provide a platform for an improvement in performance as the squad prepares to ramp up its development cycle.

The Japanese manufacturer has struggled for consistent car speed this season as it adapts the Altima to the new-for-2017 Dunlop tyres.

Caruso is currently the top Nissan performer, occupying 13the position in the championship standings.

Frustrated after a difficult weekend in Perth, team manager Scott Sinclair is confident the team’s test track will show an upturn in form this weekend.

In a bid to close the gap to the front runners, work is firmly underway on developments for the Altima earmarked for introduction at Darwin in June.

“I’m not in the business of putting numbers to results or whatever, but we’ve got an expectation of improved performance,” Sinclair told Speedcafe.com.

“Whether that’s a big improvement or a little improvement, we’ll assess that afterwards but our expectation is that we perform better than we did at Perth and we’re pretty confident we can do that.

“Unfortunately it’s not ‘click your fingers and all this happens’ (referring to the development cycle).

“We’ve put plans in place to develop, to ramp up the rate of development and that’s been a focus for us, as it needs to be.

“We don’t want to get left behind so it’s important that we keep developing.

“Certainly for Darwin there’ll be some things in the car, but any other team would say that as well.

“The change of tyres also had a bit of an impact as well, we’ve had to de-tune the car a little but, as other teams may well have as well.

“Certainly from our perspective it’s hurt a little bit and we need to quickly figure that out as well.

“The only way you can really figure that out is on track, so we get another chance at Winton to have a crack at that.”

Alongside its ramped up development cycle, Nissan appears set to engineer its own leg protection device with designs currently being assessed by Supercars.

Supercars announced earlier this year that cockpit leg protection for drivers will be made mandatory from September’s Wilson Security Sandown 500.

“That’s in V8s’ court at the moment, we’ve submitted all of the details that we want to proceed with and that’s basically using the same philosophy as the Penske one,” Sinclair added.

“We’re waiting to get the ‘okay’ on that, which we’re confident of getting and then we’ll obviously shift quickly into production mode, but the design is done, spec’s been done.”