Hayden still critical after being hit by car 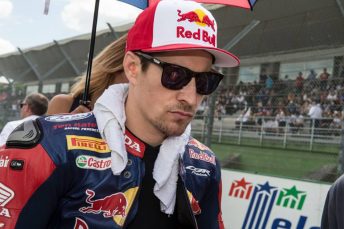 Nicky Hayden remains in a critical condition with severe head injuries after being hit by a car while cycling in Italy.

According to Italian sport newspaper La Gazzetta dello Sport, a statement was released by the hospital to which Hayden was transferred, the Ospedale Bufalini in Cesena, at 0820 local time (1620 AEST). It read:

“There are no substantial changes from what was communicated yesterday evening. Nicky Hayden remains hospitalised in the intensive care unit, the clinical picture remains extremely serious.”

Furthermore, La Gazzetta reports that the American is currently too weak to undergo surgery.

Hayden’s most concerning injury is listed as intracranial hematoma (head injury), while he also sustained fractures to the femur and pelvis.

The 35-year-old was hit by a car and thrown into the windscreen while training on the Rimini coast the Wednesday afternoon (local time) following the weekend’s World Superbikes round at Imola.

He was initially taken to a local hospital before being transferred to the intensive care unit at the Ospedale Bufalini in nearby Cesena.

Next Story Ricky Carmichael to race at AUS-X Open

Previous Story Nicky Hayden hospitalised after being hit by car