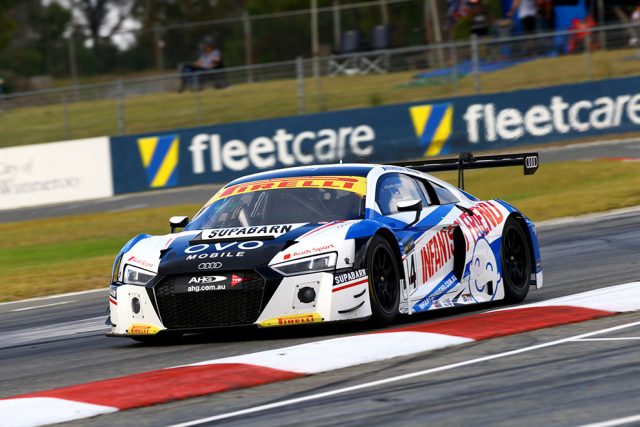 Ash Walsh hopes that a strong showing in the Australian GT Championship will help his cause in securing more overseas GT drives.

Walsh is currently in his maiden campaign in the championship, filling the professional driver role alongside James Koundouris in the Supabarn Audi R8, but does not have any international competition in his current plans.

While a combination of the driver seeding system and the timing of Safety Cars has played against he and Koundouris during the first three rounds of the season, Walsh has helped take the pair to equal-sixth in the championship.

The drive comes after limited experience in GT3 racing, namely his debut in GT Asia in July last year, and another start with with Miedecke Stone Motorsport at the Bathurst 12 Hour in February, where the Queenslander produced a stellar Top 10 Shootout lap in an ageing Aston Martin.

“At this stage, no,” the Queenslander told Speedcafe.com when asked if he had any more international drives in the pipeline.

“I would definitely like to do stuff overseas, and for sure if there’s interest then I’d take it with both hands but at the moment there’s been no talk.

“I’ve just been concentrating on what I’ve been doing. I feel like if I do a good job in the Australian championship, it can only help with that sort of thing.

The 29-year-old has impressed in Australian GT, resetting the lap record in Adelaide and crossing the finish line first in Race 1 at Albert Park before being penalised for a start infringement.

At Barbagallo, Walsh qualified on pole and set the fastest racing lap as he continued to vie with factory Audi driver Kelvin van der Linde as the quickest drivers in the field.

“It’s been pretty enjoyable to be honest, I enjoy driving the cars,” he said of his first Australian GT season.

“Before this year, I hadn’t had a lot of experience in the cars before but I had done the one-off race in Fuji and got the taste for it.

“I’m definitely glad that I’m running in the championship this year because I enjoy doing the longer races and sharing the car with someone, and the Audi’s been performing really well.”

While the Australian Endurance Championship does not figure in Walsh’s current plans, with Koundouris set to not enter his Audi, Walsh is expected to reprise his Pirtek Enduro Cup role alongside Tim Slade at Brad Jones Racing.

Slade and Walsh combined to finish on the lead lap in seventh in last year’s Supercheap Auto Bathurst 1000 despite dropping as far as two laps off the pace after a pit stop problem.

It is believed that Walsh will be the additional driver in the #14 Supercar at this weekend’s Winton Super Sprint.