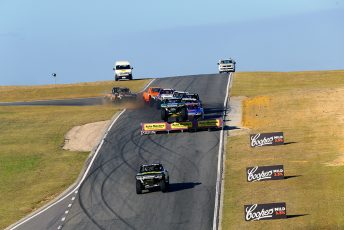 The Stadium Super Trucks during their most recent round in Perth

The Stadium Super Trucks will race for points for the first time at Hidden Valley, the Northern Territory Major Events Company has confirmed.

The series ran a demonstration at last year’s CrownBet Darwin Triple Crown, but will hold a full round of racing on the Supercars undercard in the Territory next month.

“The Stadium Super Trucks Series has been a huge hit around Australia and to bring them to Darwin’s biggest party is going to be a real highlight for our event as we celebrate 20 years of Supercars racing at Darwin’s iconic Hidden Valley track,” Hopper said.

Hidden Valley represents another new event for Stadium Super Trucks after running at the Perth Super Sprint for the first time this month.

The CrownBet Darwin Triple Crown will be held from June 16-18.