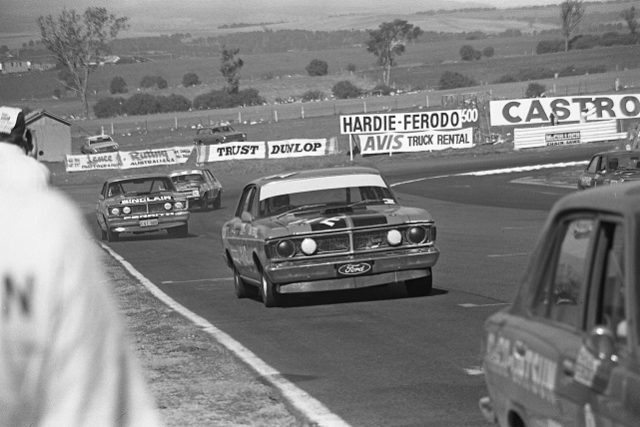 John French at Bathurst in 1971

THE mighty Ford Falcon GT-HO Phase III is an undoubted great of Australian muscle car history – perhaps the greatest of all time.

Of course, Mount Panorama at Bathurst was the place where it did some of its finest work and, as our AN1 Images Memory Lane photo today shows, the Phase III had a range of different drivers take the wheel.

In this shot, John French is at the helm of the Ford Motor Company-run #64E entry. Perhaps best known for his achievements later in his career as a Bathurst-winning co-driver with the laconic Dick Johnson in 1981, John French was very much a brilliant racing driver with his own history at Bathurst with Fords.

The Queensland car dealer began racing at Mount Panorama at the 1958 Easter meeting in a 48/215 Holden, but made his debut in what was then known as the Armstrong 500 (later to become what we all now know as the Supercheap Auto Bathurst 1000) in 1964 in a Ford Cortina GT.

After driving in the race in Morris Coopers and an Alfa Romeo in the following years, French arrived at Bathurst in 1971 as a fully fledged Ford Motor Company factory driver in the awesome Ford Falcon GT-HO Phase III.

As team-mate to the 1970 Bathurst 500 winner Allan Moffat, French helped form a handy partnership in a year where the mighty Falcons would not be touched.

However, Phase III of the mighty GT-HO Falcon was not without its problems in the lead-up to the 130-lap, 500-mile classic.

They had run out of brakes in the Sandown endurance race held as the curtain-raiser to Bathurst, meaning Hardie-Ferodo had just three weeks to come up with a solution and find a brake material that would last for the six-hour race.

What they came up with – the DP11-1103 pad – would be on the top three outright place-getting cars and eventual winner Moffat would be the first race winner to that point not to require a brake pad change during the race.

And no one else saw which way the Falcons went.

Moffat took the #65E car to pole position in a blinding 2:38.9s, while French took the #64E version to a front row start, albeit some three seconds behind on a 2:41.9s lap but still in front of a horde of privately-entered Falcon GT-HOs.

While Moffat ran off into the distance from the start to dominate the race and collect his second Bathurst win in successive years, French was beaten off the start line by Fred Gibson but managed to be second to Moffat by the end of the first lap.

The margin to Moffat was 15 seconds within 20 laps and the race was very much for second place.

When Moffat made his first stop and it took one minute and nine seconds, he resumed still in the lead, such was his gap over French, who had held off the private Falcon of Phil Barnes and the HDT Torana XU-1 of Colin Bond to hold down second position outright.

But mechanical problems would slow French’s car and he would slip back, eventually crossing the line fifth outright and one lap behind winner Moffat, thus finishing fourth in Class E.

French’s fifth outright equalled his performance from 1964 as Falcon GT-HOs filled five of the top six positions outright in the 1971 Hardie-Ferodo 500.