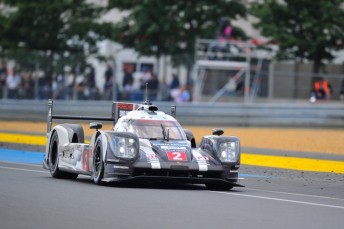 A field of 60 cars is set to take to La Sarthe for next month’s Le Mans 24 Hours.

The Automobile Club de l’Ouest (ACO) has released the entry list for the sports car classic, which includes 28 entries from the World Endurance Championship, six of which will run in the LMP1 class.

As previously reported, Toyota will run three LMP1 hybrids, but has tweaked the line-up which appeared in Round 2 of WEC at Spa.

Jose Maria Lopez, who sat out the Spa race after incurring a back injury in Round 1 at Silverstone, swaps with Sarrazin to move into car #9 with Nicolas Lapierre and Yuji Kunimoto.

The car #8 trio of Sébastien Buemi, Anthony Davidson and Kazuki Nakajima, which is unbeaten in 2017, remains unchanged.

Of the other Australians, Nick Foster continues his maiden WEC season with the Gulf Racing Porsche team in LMGTE Am, while European Le Mans Series driver James Allen and his Graff squad will run their Orecas in LMP2.