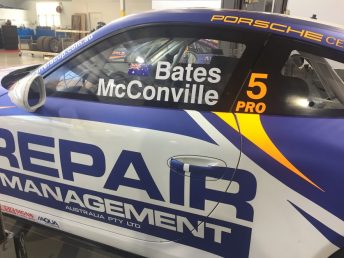 Bates’ drive in the Zagame Motorsport entry represents a return to the championship for the 2016 Tag Heuer Carrera Challenge class champion, who has this year switched to the Australian GT Championship.

Bates sits equal fourth in Australian GT after winning Round 1 in Adelaide in his Mercedes-AMG, while McConville is third outright in Carrera Cup.

“This year has been about enjoying my racing, and the Carrera Cup endurance event was always one I had pencilled into my calendar,” said Bates.

“When the opportunity came up to drive alongside Cam, I jumped at the chance.

“He’s one of the most experienced drivers in the field and still very fast, as he showed at the Grand Prix where he won the round.

McConville was similarly enthusiastic about his co-driver, who won his class in eight races in the all-Porsche championship last year.

“I’ve been following Tony since he started racing Carrera Cup, and seen him develop into one of the very best ‘gentleman’ drivers in Australia,” said the two-time Supercars race winner.

“Zagame Autosport is only a new team but I’ve proud of what we’ve achieved so far, and someone with Tony’s experience will be a great benefit for our ongoing development.”

Round 3 of Carrera Cup will be contested at Phillip Island from May 26-28 across a pair of one-hour races.