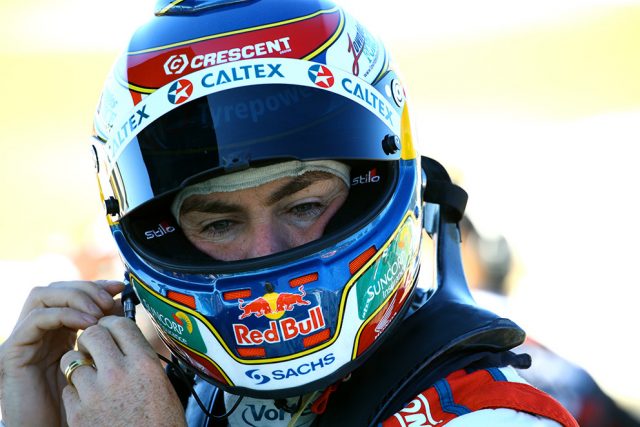 The new deal will see the fan favourite remain at the Brisbane squad until at least the end of the 2019 Supercars campaign.

Lowndes, who pilots Triple Eight’s TeamVortex entry, was in the final year of his current agreement this season, having signed a two-year extension back in 2015.

The new contract ensures the 42-year-old will pilot the squad’s new Gen2 Holden Commodore which is set to debut next year.

The three-time series winner has enjoyed a lengthy 12-year stint at the operation having joined at the start of 2005 campaign.

Lowndes has finished inside the top four in the championship every year since he has driven for the team.

He has also won five Bathurst 1000 crowns in the renowned #888 supercar, taking his Great Race total to six victories.

In 2015 he also became the first driver to reach 100 race wins in the category.

“I’m really happy to be staying with Triple Eight for at least another two years,” said Lowndes.

“I’ve been here a long time now and we’ve enjoyed a great amount of success together over the years.

“We finished fourth in the championship last year and I’m enjoying racing as much as I ever have, so it was a no-brainer for me to continue.

“Staying on with Triple Eight was always my first choice, so it’s a great feeling for the rest of this year knowing that I’m going to be continuing where I am for the foreseeable future.”

Triple Eight boss Roland Dane says he was always keen agree a new deal to keep Lowndes at his squad.

The squad’s Red Bull drivers Jamie Whincup and reigning Supercars champion Shane van Gisbergen are on contract until the end of 2018.

“Craig really is part of the family here and it’s terrific that he wants to continue with us for another two years,” said Dane.

“We’ve achieved an awful lot during his time with Triple Eight and we aim to continue building on that into the future with more race wins and of course another Bathurst win.

“There was never a question mark for me over whether we wanted Craig to stay with the team and I’m pleased we’ve been able to confirm the extension relatively early in the season.”

Lowndes is lying eighth in the championship standings heading into this weekend’s Winton Super Sprint.