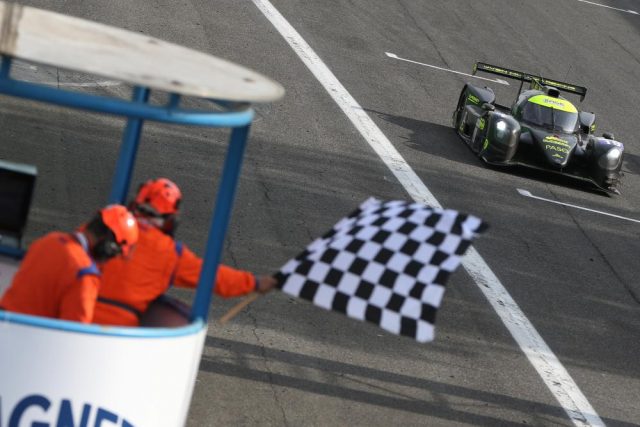 Erwin Creed takes his and Ricky Capo’s M.Racing Norma to a class victory

Australian Ricky Capo won the LMP3 class at the 4 Hours of Monza, while the #22 G-Drive Oreca of Ryo Hirakawa/Memo Rojas/Léo Roussel took outright honours in a tight finish.

Capo and French co-driver Erwin Creed took out the class by over a lap in 11th outright, with M.Racing YMR team-mates Alexandre Cougnaud/Antoine Jung/Romano Ricci next-best.

In LMP2, Roussel took the lead during an impressive third stint of the race for car #22 before Hirakawa enjoyed a 95s lead in the final stint.

While that gap was slashed due to a drive-through for failing to observe the full course yellow speed limit, the team still had enough in reserve to take a 2s victory over the #21 Dragonspeed Oreca.

In the Michelin Le Mans Cup support category, Scott Andrews made an impressive start to the weekend by topping practice despite having never visited the Italian circuit before.

Unfortunately, he never got to race a lap after co-driver Mori Yoshiharu was caught up in a first-corner crash. 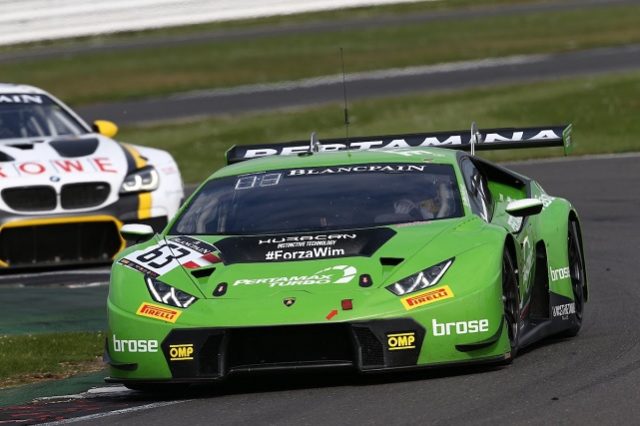 The Grasser Racing Team’s winning streak has continued in Blancpain GT, this time in the Endurance Cup at the 3 Hours of Silverstone, while Australia’s Matt Simmons finished 24th.

Mirko Bortolotti initially led the race in the #63 Grasser Lamborghini Huracan before smart pit work put the #90 AKKA ASP Mercedes-AMG into the lead.

During the second stint, Andrea Caldarelli slipped backed to third in car #63 while trying to reclaim the lead, but a fast final pit stop gave the Grasser team the ascendancy again.

Christian Engelhart took the chequered flag first by just 0.3s over HTP Motorsport’s Maximilian Buhk to add to Grasser’s wins in the Endurance Cup at Monza and the Sprint Cup at Brands Hatch the weekend prior.

Simmons finished 24th outright in the #22 Nissan GT-R after the team lost track position under a virtual safety car.

What a difference a year makes. In ’16 @GTAcademy winner @mattsimmons08 was an “AM”. In ’17 the “PRO” is fighting through the “AM” traffic. pic.twitter.com/9w9AoV4cKr

The Sprint Cup is the focus during Round 5 at Zolder from June 2-4. 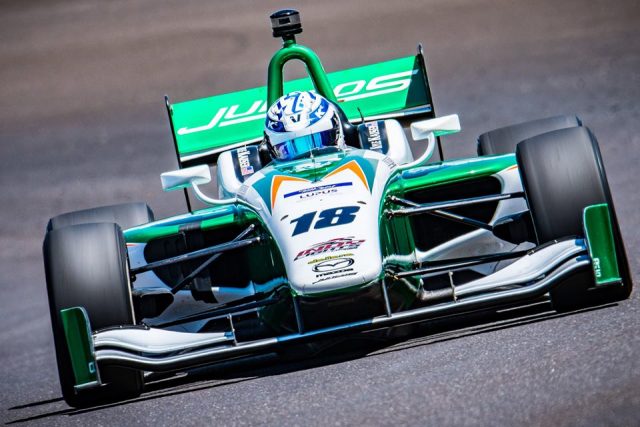 Kyle Kaiser took over the Indy Lights series lead with a lights-to-flag victory in the second race on the Indianapolis road course.

The Juncos Racing driver faced an early onslaught from Santi Urrutia, making contact on Lap 2 before Urrutia outbraked himself on Lap 4.

Kaiser eventually cleared out to a 6s win in the 35-lap encounter.

In the opening race, Nico Jamin also led all the way.

The Freedom 100 will be run on the full Indy speedway on May 26. 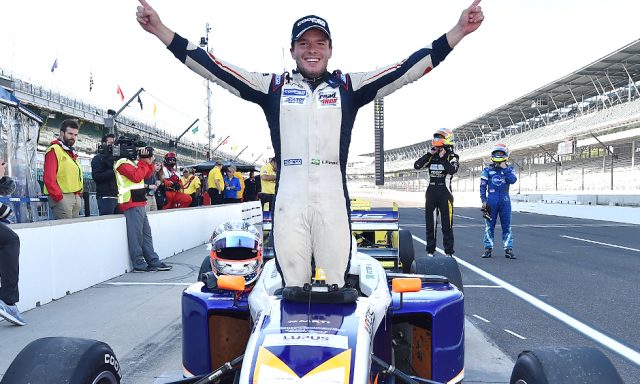 Australian Anthony Martin has lost the championship lead in Pro Mazda to Victor Franzoni, who won both races in Indianapolis.

Franzoni led Race 1 from pole and while Martin soon enjoyed a spell up front, the Brazilian made the pass on Lap 6 and never looked back.

Martin finished that race in second, 5s off the lead, and Race 2 in fourth, with six points the deficit to Franzoni ahead of the Road America round on June 24-25.

Fellow Australian Steven Ford was 13th and 12th in his debut races. 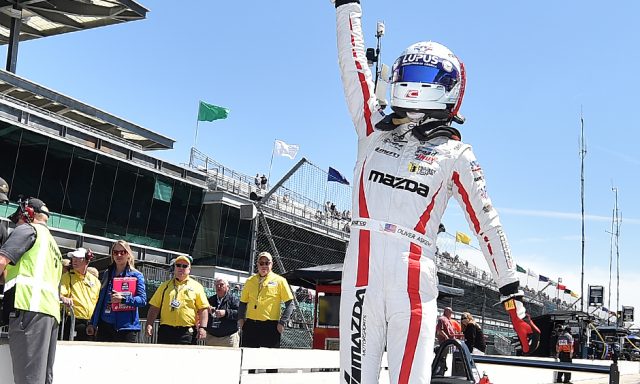 Oliver Askew took a pair of race wins at the Brickyard to go five in a row in USF2000.

Australian Luke Gabin walked away with finishes of 10th and sixth. 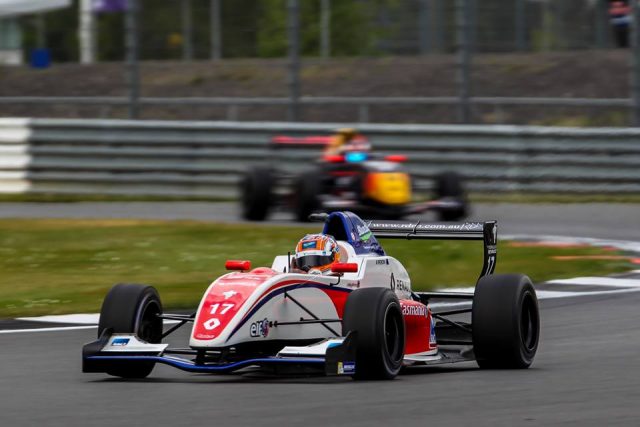 Will Palmer and Robert Shwartzman shared the two race wins in Round 2 of Formula Renault Eurocup at Silverstone.

Despite a safety car, Palmer led Race 1 for the duration after pole-sitter Max Defourny suffered a clutch problem.

Shwartzman lost the start to Daniel Ticktum in Race 2 but soon took over the lead and then kept R-ace GP team-mate Palmer at bay to close out the 12-lap race by less than a second.

Alex Peroni leads the Australian contingent in tenth in the series.

The Tasmanian ran inside the top five early in Race 1 before finishing sixth, but could only managed 21st in Race 2 after contact from Pedro Chaves punctured the left-rear tyre.

Luis Leeds finished 23rd and seventh respectively, Thomas Maxwell 22nd and eighth (the latter from 17th on the grid), and Zane Goddard 13th in both races.

Palmer leads the standings with Round 3 at Pau from May 19-21. 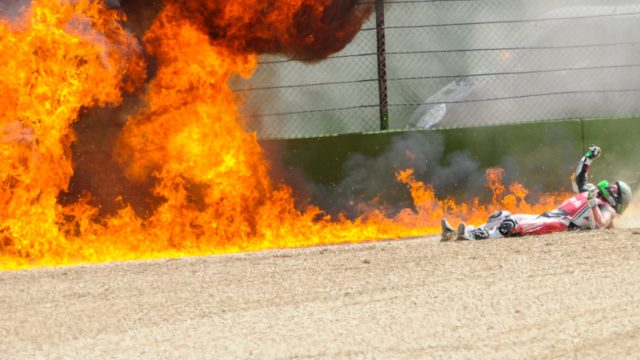 Chaz Davies has taken a pair of race wins in Round 5 of World Superbikes at Imola, while Eugene Laverty escaped injury despite a spectacular fireball engulfing his Aprilia.

Battling with Alex Lowes on Lap 13, Laverty made contact with his rival’s Yamaha and cut his front brake line, prompting the Irishman to throw himself from his own bike as it sped towards a wall and then went up in flames.

“I had no brakes because the brake line came out when we bumped together,” explained Laverty.

“I tried to pump the brakes a few times, then I realised there was nothing working and the wall was fast approaching, so it was time to get the hell out of there. It is good I got off when I did.”

Davies, meanwhile, was dominant in Race 1 on his Ducati, which was cut short by the Laverty incident, then won again from ninth on the grid in Race 2.

Laverty returned for that encounter on another bike, finishing seventh.

Jonathan Rea continues to lead the championship off the back of a pair of second placings, with Round 6 at Donington on May 26-28. 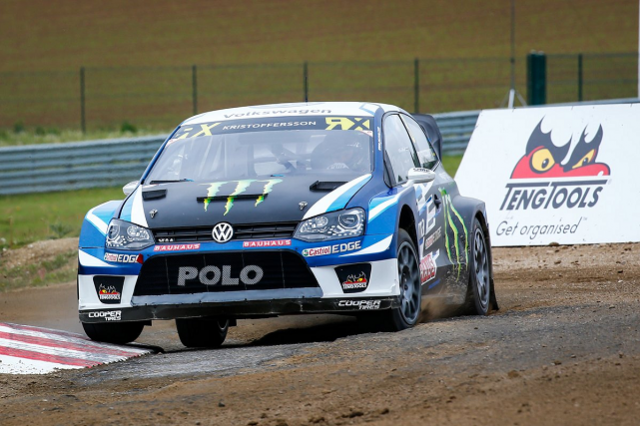 Johan Kristoffersson has ended Mattias Ekstrom’s winning start to the World Rallycross Championship in Round 4 in Belgium.

Timmy Hansen led into the last lap of the final but incurred a puncture on his Peugeot over the jump.

Hansen then took his joker and slotted in just behind Kristoffersson’s Volkswagen, who took victory after starting from the second row.

Ekstrom finished fourth, and his championship lead has been cut to three points over Kristoffersson ahead of Round 5 in Great Britain on May 26-28. 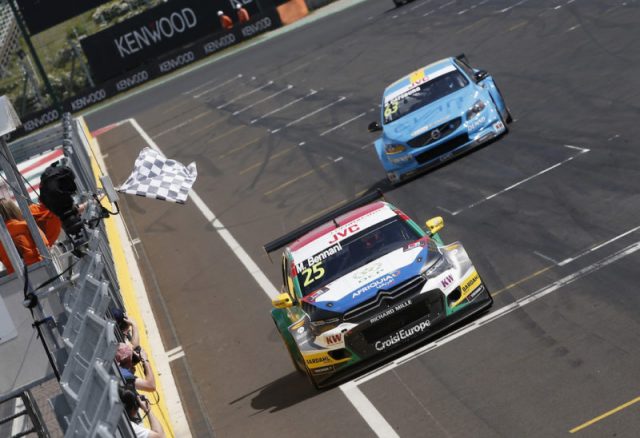 Tiago Monteiro and Mehdi Bennani shared the spoils in WTCC Round 3 at the Hungaroring.

Monteiro (Honda Civic) led all the way in the opening heat from second on the grid after fellow front-row starter John Filippi (Citroen C-Elysee) stalled.

The Moroccan regained first position when Huff served a drive-through for contact with Néstor Girolami on the opening lap which ended the Volvo S60’s race.

Monteiro leads the championship ahead of Round 4 at Nurburgring from May 25-27. 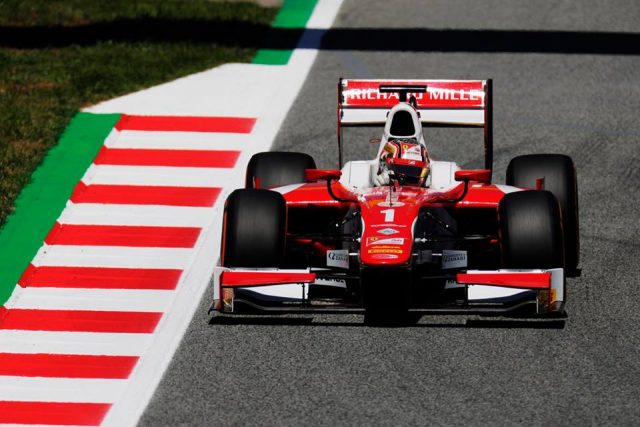 Charles Leclerc won a Formula 2 feature race for the first time before Nobuharu Matsushita took out the sprint race in Barcelona.

Leclerc got the jump from pole in the feature and while Luca Ghiotto lunged down the inside of the Ferrari junior driver at Turn 4, he couldn’t pull up car #5 sufficiently to complete the move.

The pit stop cycle and a Safety Car shuffled the order somewhat but the race came back to Leclerc as those in front took their pit stops, with the Monegasque driver eventually beating Ghiotto by 3.7s.

In the sprint race, Nicholas Latifi led until Lap 22 of 26, when the Canadian threw away a likely victory as he ran off at Turn 5.

Matsushita inherited the lead while fourth for Leclerc kept him on top of the points table for the trip to Monaco on May 25-27. 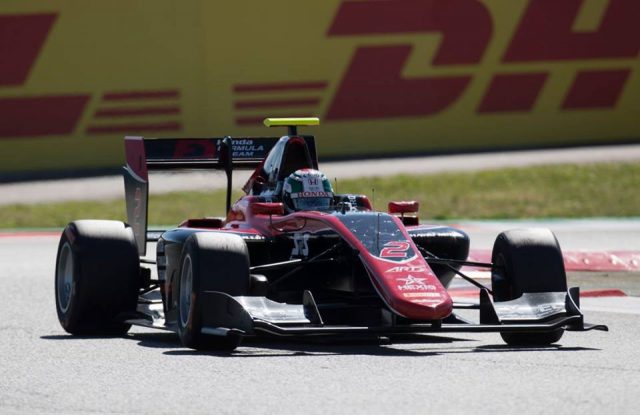 Round 1 of GP3 in Barcelona saw maiden wins for Nirei Fukuzumi and for an Indian driver in the series as Arjun Maini won Race 2.

In Race 1, Fukuzumi battled with ART team-mate Jack Aitken at the front of the field before the latter dropped out of second place on Lap 16 with a mechanical problem, giving the Japanese driver an easy passage home.

In Race 2, Maini faced a stern challenge from Dorian Boccolacci before slight contact between the pair through Turn 2 on Lap 5 cost the Frenchman time and allowed Maini to break away to a 6s win.

Fukuzumi heads Alessio Lorandi and Maini in the standings ahead of Round 2 at the Red Bull Ring from July 7-9. 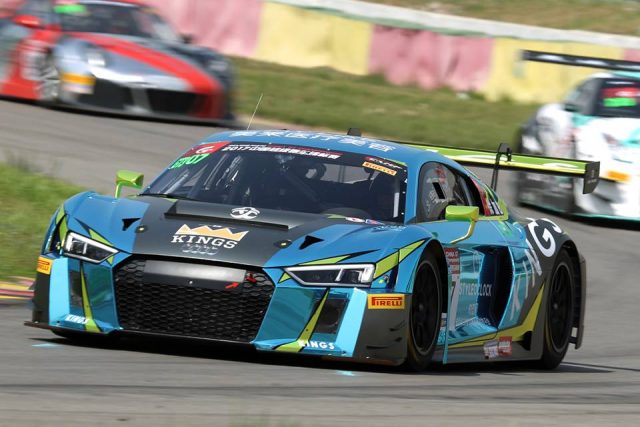 Xu Jia won both Rounds 1 and 2 of GT3 in the China GT Championship’s first event of the season at Goldenport Motor Park.

Xu qualified on pole and led from start to finish despite a safety car and lap traffic eating into his lead at various times.

Chris van der Drift/Li Chao were non-finishers after Li tripped up with Alex Au early in the race and both ended up deep in the gravel trap.

Xu also won Round 2 the following day, while van der Drift dragged his and Li’s Porsche 911 from the rear of grid to second despite his co-driver being turned around during the race.

In GT Cup/GT4 competition, Huang Xi Zhan won Round 1 in GT Cup class and Kimi Qin Round 2, while both GT4 class wins went the way of Roelof Bruins/David McIntyre.

The next event will be held at Ordos International Circuit on July 8-9.