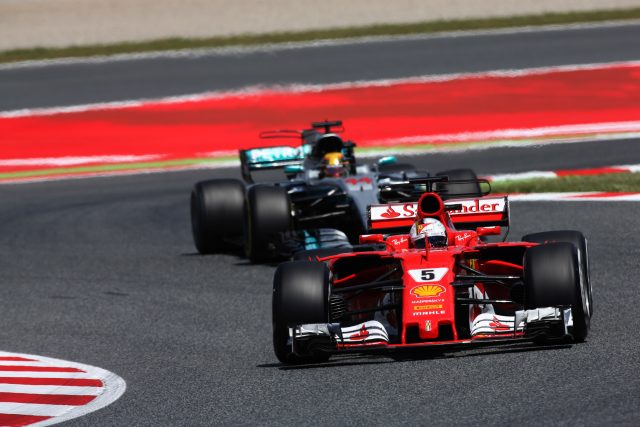 Sebastian Vettel believes an opportunity to win the Spanish Grand Prix slipped through his fingers after losing valuable time behind the Mercedes of Valtteri Bottas in the middle stint.

The four-time world champion managed to grab lead from pole-sitter and eventual winner Lewis Hamilton at the start before losing out to the Brit in the final stint.

Vettel felt he twice lost key advantages to Hamilton – first when he was held up behind temporary leader Bottas as the Finn ran much longer in his first stint than the other frontrunners, and later when Hamilton made his final pitstop just as a virtual safety car period was ending.

“Lewis had the luxury to stay out and choose a different tyre.

“With Valtteri I was catching him and I knew they (Mercedes) wouldn’t pit him.

“He was all over the place with the tyres, so they used him a bit to block me.”

Vettel eventually made it past Bottas with a bold move into the first corner.

“He still somehow managed to get a decent exit (from the chicane) so I couldn’t do it first time,” said Vettel.

“Second time I thought I had to find a way even if it was on the grass.

“It was really close, I faked it on the inside, then went back on the outside and inside again, but nearly lost the car as I had DRS open – but it worked.

“I looked down and I had lost an awful lot of time.”

He then rebuilt a margin when on soft tyres in the middle stint while Hamilton was on mediums, but found that gap gone when they made their final stops and took the opposite tyres.

Hamilton had pitted just as a virtual safety car period for Stoffel Vandoorne’s damaged McLaren was ending, helping him gain some time before the race was back to full racing conditions.

“I don’t know what happened in the last stint,” said Vettel.

“When I came out of the pits I was surprised it was close because I thought I had eight seconds in hand.

“That could have brought a cushion.”

Vettel resisted Hamilton’s initial attack on his out-lap but was overtaken around the outside into the first corner not long afterwards.

“I thought it would be more difficult for him the longer he tried but then I had no tow [from backmarkers] and he sailed past,” said Vettel.

“He managed a really good exit and was really quick in last sector and managed to win the race.

“Well done to him, he won it fair and square and you can’t take it away from him.”

Hamilton admitted the battle was one of most physical and enjoyable of his Formula 1 career.

“Seb was so fast ahead, it was such a push to try to keep close to him and not let him pull away,” said Hamilton.

“It was just the rawest fight I can remember having for some time, which I loved. This is what the sport needs to be every single race and this is why I race, what got me into racing.

“To have those close battles with him, a four-time champion, is awesome.

“In the end we came out so close together which was very, very close into Turn 1, I gave you [Vettel] space otherwise we would have touched. It was close, it was cool.

“In the heat of the moment it’s difficult to know from the outside, I felt like I ran out of road but was alongside.

“But it was how racing should be – I love it, I wouldn’t change it for the world.”

Hamilton has closed to within six points of Vettel in the championship standings.