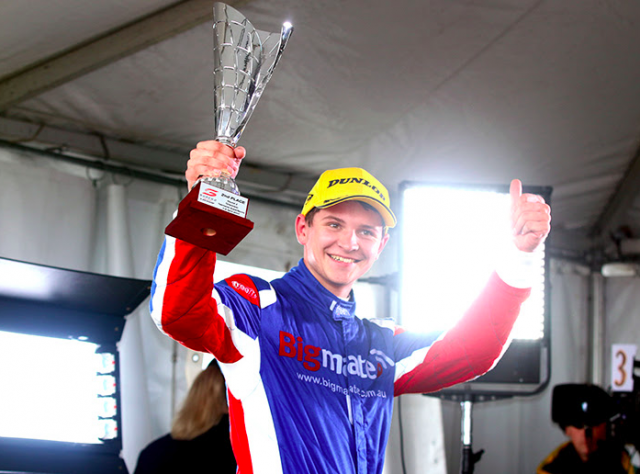 Todd Hazelwood will sample a Brad Jones Racing Holden Commodore at Winton this weekend as the squad evaluates its co-driver options for the upcoming Pirtek Enduro Cup.

Hazelwood is yet to make his main game debut having spent the last three seasons racing in Supercars’ second tier.

Brad Jones Racing is yet to confirm its co-driver line up for the Sandown, Bathurst and Gold Coast endurance races with an announcement expected soon.

Having raced the #21 in the last two Pirtek Enduro Cup campaigns, Macauley Jones will receive a run out in the session, piloting Nick Percat’s #8 Commodore.

Jones is set to make his solo main game debut this weekend as part of Supercars’ new wildcard program for super sprint events.

The operation’s #14 entry will also be piloted by Ash Walsh during the session with the Queenslander likely to retain his seat alongside Tim Slade.

”There is a fair height difference between them but we think we’ve got Macauley fitted in as best as possible.

“Todd Hazelwood is going to join the team for the weekend and drive the Team CoolDrive car with Tim Blanchard.

“For Todd, this is his first time behind the wheel of one of our cars and I’m looking forward to seeing how he performs.

“Our plan is to give both Macauley and Todd some seat time in the different cars and we will assess the dynamics between everyone.

“We’ll confirm the pairings down the track, but this is our chance to give both guys a go and we’ll move forward from there.”

Hazelwood is eagerly anticipating the opportunity to drive for a main game team.

“I’m really looking forward to working with the team at BJR and getting behind the wheel of the Team CoolDrive Supercar for the first time Winton this Friday,” said Hazelwood.

“There is a lot of information for myself to absorb during the session.

“For me it will be interesting to discover how the BJR chassis performs and what it is like driving on the softer compound rubber compared to what I am using in the Dunlop Super2 Series.

“I really appreciate the opportunity both Brad Jones Racing and Tim Blanchard have provided.”