Bittersweet podium for Ricciardo in Barcelona 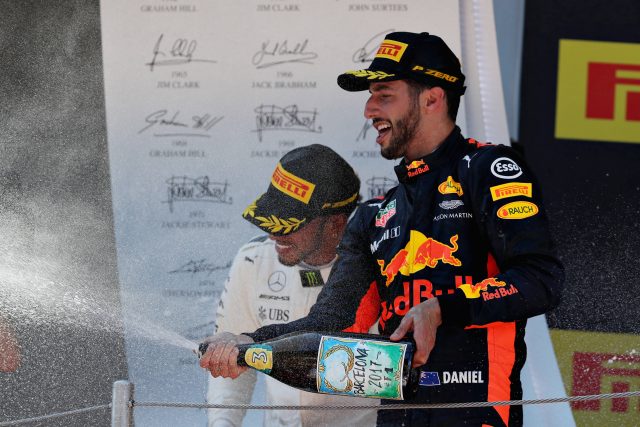 Daniel Ricciardo celebrates on the podium

Daniel Ricciardo says he is fully aware of the growing deficit to Mercedes and Ferrari after a lonely run to his first podium of the season at the Spanish Grand Prix.

Ricciardo spent the majority of the race occupying fourth before an engine failure for Mercedes’ Valtteri Bottas promoted the Australian to third.

While frustrated by the margin to the front runners, the 27-year-old was however pleased to return to the podium after a challenging start to the season.

“I am aware of the gap to the leaders, I think they lapped up to fourth place and I was the next victim,” said Ricciardo.

“I was wondering if they had lapped me and taken each other out if I would win the race?

“To be honest I am aware of the deficit but I am just trying to soak up the podium.

“Valtteri (Bottas) had mechanical problems and we were fourth and got promoted to third, but we will take what we can get.

“We just were not as fast as Seb and Lewis, they were very strong.”

Ricciardo is already looking forward to the next round in Monaco where he cruelly lost a likely victory 12 months ago.

He admits his RB13 is not quite a match for its predecessor, but is eager to showcase his skills at the tricky street circuit.

“Beyond the mustard and all that I am excited to get back there.

“I am aware that we probably don’t have the package we had there last year, but I’m still excited to rag the car around those streets and remind people of my abilities.”

The podium finish in Barcelona has seen Ricciardo climb to fifth in the championship standings.