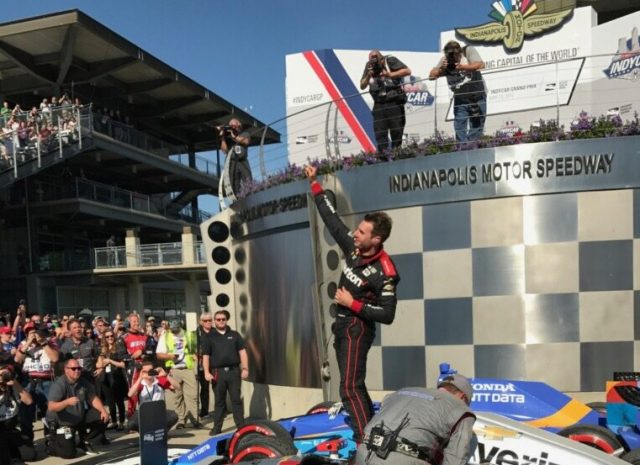 Will Power has taken his first win in eight races with a comfortable victory at the Grand Prix of Indianapolis.

While strategy saw his Team Penske Chevrolet team-mate Helio Castroneves lead the second stint of the race, Power regained the lead at his second pit stop and eventually took a 5.2s win.

Having taken a track record pole, Power led the field away while team-mate Simon Pagenaud was shuffled back from seventh to ninth on the opening lap.

Worse-off was Tony Kanaan (Chip Ganassi Honda), who was pushed into a spin by Marco Andretti (Andretti Honda) at Turn 7, while Sebastien Bourdais (Dayle Coyne Honda) suffered a second DNF in a row when he pulled off with an engine problem on Lap 4.

Second-placed Castroneves pitted on Lap 22 and went against convention by staying on the quicker red tyres, with Power and Dixon stopping a lap later to change to blacks.

That call gave Castroneves the lead, which he stretched to just over 3s by the time the second pit stop cycle started just beyond the Lap 40 mark.

This time, Power was first into the lane on Lap 42, with he and Dixon back onto reds and Castroneves staying on reds.

Castroneves emerged in second despite a confusing pit stop in which his Team Penske crew lost power to their pit stand, the order remaining until the final set of pit stops started with Scott Dixon on Lap 63.

Dixon and then Power took brand new red tyres while Castroneves necessarily had to switch to black tyres.

The New Zealander got past car #3 on the track on Lap 69, by which time Power was already 7.8s up the road.

After a horror run of luck, the Queenslander could cruise to victory in a relatively straightforward race which ran without any cautions, his 30th IndyCar win and Team Penske’s third in a row.

“Dixon was closing there for a while so I was just really trying to manage the gap and manage the tyres because they degrade a lot,” said Power.

“I have to say the Chevy engine was mega today, Chevy has done a great job and I know Honda got a little bit of a gain on it but we’re already back.

Dixon was 6.7s clear of Hunter-Reay in the end, while Pagenaud took fourth after Castroneves faded late in the race as one of only two to come home on black tyres.

The first came as the Team Penske driver passed a lapped car during what should have been his final exit from pit lane, while the second was for speeding during the first PLP.

Pagenaud continues to lead the championship while Power has moved from seventh to fifth, with practice for the Indianapolis 500 starting on Monday May 15 (local time).

Championship points: After Round 5