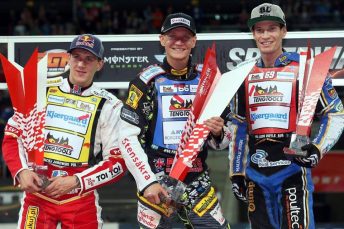 Lindgren beat Maciej Janowski in a thrilling final in Warsaw, extending his championship lead over Doyle.

The victory is just the second of Lindgren’s career, just short of half a decade since the Swede took out his home SGP in Gothenburg in May 2012.

“Right now I am just pumped with adrenaline,” said Lindgren.

“It’s so cool to ride in this stadium in front of all these people and perform like I did tonight.”

“I feel absolutely awesome. I have only won one GP before. This is so important for me.”

Janowski came up just short of what would have been the first win for a Pole on the home soil of Warsaw.

While Doyle was not in the fight for victory in the final, he was content to make the podium and move up to second in the points standings.

“It’s nice to finally be on the podium after going all the way in Slovenia and not making it on to the rostrum,” he said.

“What a race! You get to the final and it’s no holds barred. What a great ride from Freddie and Magic.

“They were throwing everything at each other and I just had to sit back and watch the show.”

Fellow Australian took a heat win on his way to 12th overall for the meeting.

Round 3 will be held in Daugavpils, Latvia on May 27.