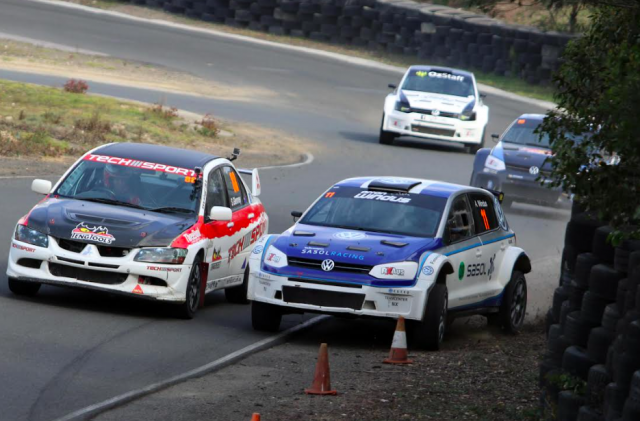 Steve Glenney (left) proved the class of the field

Steve Glenney emerged from a thrilling final to claim victory in the second round of the RXAus rallycross series at the Marulan circuit.

The duo were never split by more than half a second with the race being declined by the joker laps in the final two tours.

Orders took his joker on his penultimate lap, counting on getting track position on Glenney when he took the detour on the final lap of the race.

When Glenney took his on the final lap the pair emerged on the final straight side-by-side, with only his added momentum allowing him to edge Orders home by 0.4 seconds.

Justin Dowel was unable to start the Super Final after mechanical issues on his Hyundai i30.

“The thing with Rallycross is that the tracks are fairly tight so while we’re all really keen to have a lot of horsepower it’s about managing it.

“If he had got the start he would have cleared out and pulled away from me but as it was, it was a good race and good for the crowd.”

“It’s a great little track at Marulan and a good mix of dirt and tarmac and good close racing.

“There was some really good competition here this weekend and lots of good drivers turned up with some fantastic cars, which made the competition really close.

“Every time you enter a rallycross event it’s really enjoyable. Every time you get out of the car you’re pumped and you’re high fiving everyone whether you came first or fourth.”

A dominant Mike Conway won the 2WD Group A final, leading lights-to-flag in his screaming Ford Escort RS to win by three seconds.

The RXAus rallycross series will head to Queensland’s Carnell Raceway at Stanthorpe for the third round on June 10.