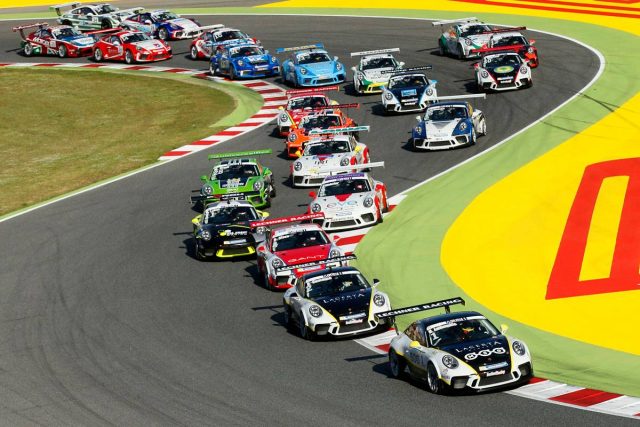 Carrera Cup Australia champion Matt Campbell has scored a solid fifth place in his debut at the Porsche Supercup in Barcelona.

Campbell, who earlier in the day stunned the Supercup fraternity with pole position, got a slow getaway off the start and slipped back to seventh place heading into the opening turn.

The Porsche Junior driver then moved up two spots, including passing Fach Auto Tech team-mate Josh Webster but with the ultra-competitive pointy end of the field in front of him, the Queenslander was unable to make further progress as he finished in a train of cars from second place.

This was despite being the third-fastest man on the track behind race winner Michael Ammermüller.

“Unfortunately I botched my start a bit,” said Campbell.

“I let the clutch out too soon and almost choked my engine. I’ve learnt my lesson; I have to work on my start. Hopefully it’ll go better for me in Sunday’s race.” 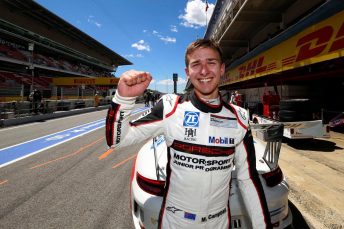 Campbell was all smiles after qualfiying

Campbell will start off pole for the second race after his second fastest time in qualifying was good enough for the first spot.

Starting off the front row, Ammermüller (Germany) took the lead and came home ahead of Dennis Olsen (Norway) and Dan Cammish (Great Britain).

‘Not even a safety Car period could stop Ammermüller.

“The race ran perfectly for me,” said Ammermüller.

“Following the short safety car phase after the first lap I was able to pull away from the field and bring victory home.”

A total of 31 drivers from 18 countries took part in the opening race with the all-new version of the Carrera Cup 911 GT3.

The second race in Barcelona will be run early evening Australian time.