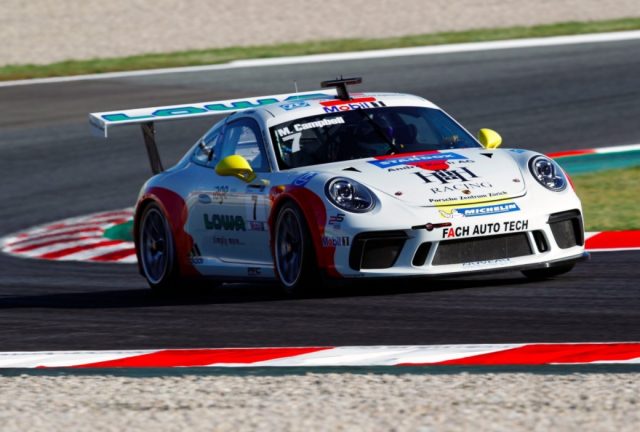 Matt Campbell has finished third in the second race of the Porsche Supercup in Barcelona to go along with his fifth-place finish in the opening race yesterday.

Starting off pole Campbell lost out in the run down to the opening turn to Dan Cammish. The Australian Carrera Cup champion then pressed on the second lap with Race #1 winner Michael Ammermüller getting through into the lead ahead of Campbell.

Campbell had fellow Porsche Junior driver Dennis Olsen of Norway in his mirrors and he made a minor error at the final chicane on the sixth lap.

From that point, he settled into third position through to the finish.

“I’m very happy with third place, especially since not everything ran as well as it could have,” said Campbell.

“It’s my first Supercup season and you notice how incredibly close the competition is in this series. I’m excited to see how things continue.”

Overall it has been a successful debut in the top-tier Carrera Cup.

Aboard the all-new version of the 911, Campbell took two pole positions along with a fifth place and is well in the points fight heading to the next race at Monaco in fortnight’s time.

Next Story Slade to partner Grove in Porsche Pro-Am