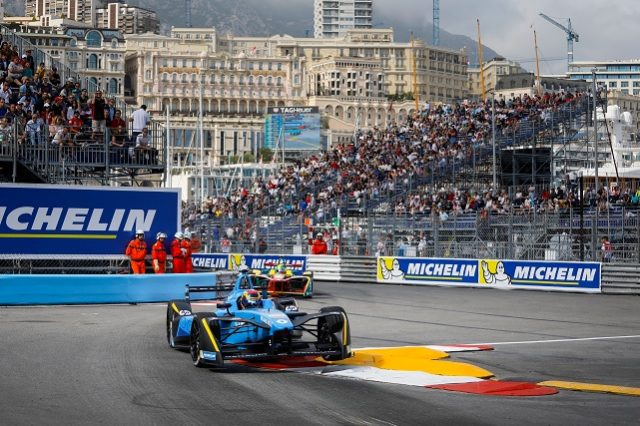 Sebastien Buemi has beaten Lucas di Grassi in a grandstand finish to Round 5 of the FIA Formula E Championship in Monaco.

Di Grassi was on a charge as the 51-lap race drew to a close but couldn’t find a way past Buemi and crossed the line 0.3s adrift, while Nick Heidfeld was a distant third.

Having qualified on pole for the first time this season, Buemi converted at the start and drove away to a lead of exceeding 5s.

Di Grassi had also gapped Nelson Piquet Jr., who came under attack from Jean-Eric Vergne, and the matter came to a head on Lap 21.

Vergne (Techeetah) went to the outside of Piquet Jr. at the Turn 3 hairpin, the two collided, and the man who initiated the move ended up in the wall, necessitating the safety car.

That prompted all drivers to take their car change, before racing resumed on Lap 26.

From there, Buemi gradually built up a lead of 1.6s in his e.dams Renault, helped in part by FanBoost, but di Grassi closed the gap in the latter stages.

The ABT driver trailed by 0.4s with a lap to go and tried hard to find a way past but couldn’t do so, leaving Buemi to take his fourth win of the season and extend his championship lead to 15 points.

Heidfeld (Mahindra) finished 13.3s further back, having made up three positions around the outside of the pack at the first corner and then inheriting a podium position when Piquet Jr. and Vergne clashed.

Piquet Jr. (NextEV) salvaged fourth after he got back to pit lane for his car change having only lost the one position, beating Maro Engel in a tight battle.

Engel (Venturi) in turn had to keep Felix Rosenqvist (Mahindra) and Daniel Abt (ABT) at bay, while Esteban Gutierrez (Techeetah) inherited eighth after Robin Frijns (Andretti) ran out of energy on the final lap.