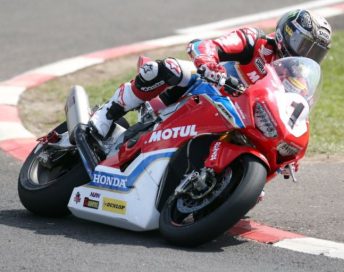 John McGuiness is in doubt for this year’s Isle of Man TT after breaking his right leg in a crash at the North West 200.

McGuinness crashed during practice for the Northern Island road race around the Primrose Hill section of the circuit.

He was taken by ambulance to Royal Victoria Hospital in Belfast, which has said that he was in a stable condition.

The Englishman subsequently underwent surgery to have a plate fixed to his tibula/fibula.

Honda Racing has tweeted that McGuiness, who retained consciousness during the incident, was “in good spirits.”

The 45-year-old has 23 Isle of Man TT wins to his name, second on the all-time winners’ list.