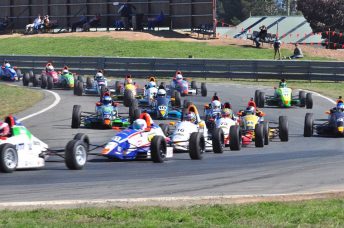 Formula Ford during the most recent round at Wakefield Park

A 31-car Australian Formula Ford field is set to take to the track for Round 3 of the series at the Winton Super Sprint.

Formula Ford returns to the Supercars undercard for the first time since December 2013 after state level events held at Sandown and Wakefield Park.

Sonic Motor Racing’s Max Vidau leads the series after winning both rounds thus far in his Mygale, the South Australian taking a race win at Sandown and two at Wakefield Park.

His nearest rival, New South Wales’ Jayden Ojeda, is the other multiple race winner heading into the Winton round, having claimed Races 1 and 2 at Sandown.

The Kiwi scored pole but had an early off in Race 1 and was demoted from victory in Race 2 due to a driving infringement, before again making up several positions to win the finale. Cameron Shields will be in action off the back of winning Round 3 of the CAMS Australian Formula 4 Championship at Barbagallo.

Nick Schembri will be making his national level debut after the Preston Hire-supported 14-year-old appeared in a race car for the first time in Victorian Formula Ford last weekend at Phillip Island, with a best race result of eighth in Race 3.

Jordan Boys is a notable absentee from Formula Ford, but will race at Winton.

Boys is currently fourth in the standings but has already graduated to an Image Racing V8 Touring Car after sensationally winning a race and the round on debut in Round 1 at Phillip Island.

The Winton Super Sprint takes place from May 19-21.

Next Story Glenney victorious in thrilling final on RXAus debut