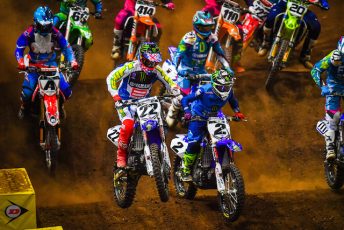 Chad Reed is the first confirmed entry for this year’s AUS-X Open in Sydney.

Reed is the most successful rider in the short history of the AUS-X Open, having won three of the four SX1 finals held across the event’s first two years, and finishing runner-up in the Night 2 final in 2015

The 35-year-old Kurri Kurri native’s Yamaha contract expires at the end of the year, leading to speculation that the AUS-X Open could be Reed’s final race.

However, no decision has yet been confirmed.

“Currently, I don’t have a contract for the 2018 season,” explained the two-time World Supercross champion.

“My intention is to continue racing, but if it’s not meant to be, I couldn’t think a better place to end my career than the AUS-X Open amongst my friends, family and fans.”

The AUS-X Open incorporates the fourth and fifth rounds of the six-round Australian Supercross Championship, as well as featuring freestyle motocross.

The 2017 edition, which will continue to be held at Qudos Bank Arena (Sydney Superdome), was recently locked in for a November 11-12 date.