Aaron Seton will make his Supercar racing debut when lines up in the Kumho V8 Touring Car Series at Winton next weekend.

Seton, who is driving in the Toyota 86 Racing Series, had been eyeing a move to the series after testing the car at Queensland Raceway in March.

The drive at Winton is a one-off at this stage although the 18-year-old hopes to make a further outing at Queensland Raceway in July. 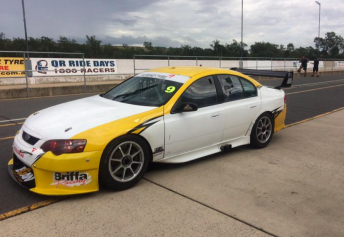 The Ford Falcon Aaron Seton will drive at Winton

The car, a spare chassis from WPS Racing, has seen service in the Super 2 series in the hands of Luke Youlden and Ryan Hansford.

Seton easy the opportunity will provide valuable experience as he looks to rise up the touring car ladder.

“It’s an awesome opportunity that Rod Dawson has given me, and I can’t wait to get my first experience in one of these cars,” he said.

“It was great to get some experience in the car and feel what they’re like.

“We’ve worked hard to put all of this together so I’m looking forward to getting to Winton and seeing how we go.

“It’s all about getting laps and experience so we’re going in with no expectations.

“We’ll go there and have fun, experience the car and race in front of the Supercar teams in a Supercar.”

Seton hopes to be able to tap into the experience of his 1993 and 1997 ATCC winning father Glenn if required during the Winton weekend.

“Whenever I have a question I can go to Dad and ask him anything,” Aaron added.

“He gives good feedback when you’re doing something wrong so as a driver it’s good to have someone like him on your side.”