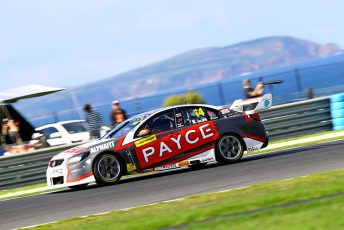 Macauley Jones during the most recent Super2 round at Phillip Island

Macauley Jones says that his wildcard appearance in the upcoming Winton Super Sprint will present a valuable challenge against Supercars’ best.

Jones will be one of three wildcard entries for the fifth event of the Virgin Australia Supercars Championship, among five in total who will make starts across Winton, Hidden Valley, and Queensland Raceway.

The others are James Golding, Shae Davies, Jack Le Brocq, and Todd Hazelwood, of which the former two will also be in action at Winton.

The 22-year-old stepped up his preparations with a test at the rural Victorian venue where he evaluated the new 2017 Dunlop tyres for the first time.

Jones is arguably best-placed given his familiarity with the VF Commodore and the circuit, which is Brad Jones Racing’s test track, plus two Pirtek Enduro Cup campaigns with the family team.

However, he maintains that racing against the full-time stars will make the outing a major challenge.

“It’s going to be quite a lot different,” Jones told Speedcfae.com.

“Having to race against all the main series drivers at the same time will be a big step-up.

“They race hard and they fight for sheep stations, and being in the co-driver (in enduro races) is a bit different as you’re always trying to do the best job out there, have a clean race, and hand it back to your main series driver.

“That isn’t the case for this race meeting.

“It’s definitely a good way to get your name out there, and just to get more familiar with racing against the guys that are doing it week in, week out, and getting a lot of experience from it.”

Jones says the new Dunlop rubber is a far cry from the old construction hard compound which is still run in the Dunlop Super2 Series.

“(It’s) A lot better than the DVS hard tyre!” he said of the super soft.

“It was a hard thing to get used to, having that much more grip there and trying to learn where the actual grip is in the corner and in braking, so I really liked the tyre.”

MW Motorsports’ Davies shared the rural track with Jones and was similarly enthusiastic about the new-specification rubber. 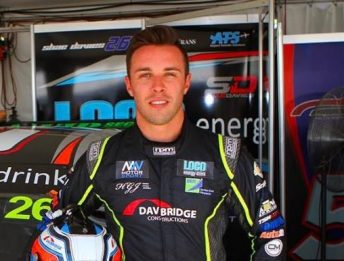 “It was pretty mind-bending initially,” he said of the speed of his Nissan Altima on the super soft compound.

“I went with a set of old hards right to the belts (at the beginning of the day) so I went two to three seconds a lap quicker just on that transitions.

“It was a lot to get used to, it requires a very different car balance, but obviously thoroughly enjoyed the extra grip that’s for sure.”

The 27-year-old ran the latter half of the 2016 Supercars Championship with Erebus Motorsport, having initially been signed for the enduros only, after Aaren Russell split with the team.

With the chances of a return to the Pirtek Enduro Cup in 2017 appearing slim, Davies maintains that his focus is to re-establish his credentials for 2018.

“There’s nothing locked away for myself with enduros as yet,” he confirmed.

“There are some wildcard options that are on the table but ideally I’d work on a Pirtek Enduro Cup seat with one of the main game teams.

“The seats are pretty few and far between this year so really my objective is to have a strong showing in these two wildcards, a good championship in Super2, and put a good foot right forward for a decent ride next year either full-time or a Pirtek Enduro Cup seat.”

The Queenslander moved from eighth to fourth in the most recent Super2 round at Phillip Island, having been the only driver to finish in the top three in all four races.

Jones’ and Davies’ first wildcard starts will come at Winton on May 19-21.