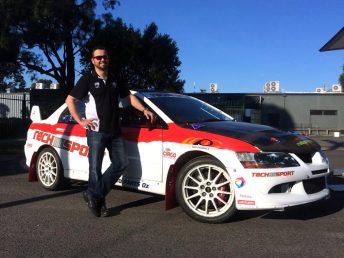 Former Targa Tasmania winner Steve Glenney will make a return to rallycross after confirming plans to join the new RXAus series this weekend.

The South Australian is set to pilot a TechSport Mitsubishi Lancer EVO 9 in the second round of the series at New South Wales’ Marulan circuit on Sunday.

Glenney, who won Targa Tasmania in 2008, will bring a wealth of experience to the growing category having been successful in the Australian Rally Championship, while tasting victory in an international rallycross event in New Zealand last year.

He also won the one and only round the Extreme Rallycross Championship at Lakeside Raceway, when he beat former World Rally Championship driver Alister McRae.

“I think rallycross is one of the most enjoyable forms of motorsport, it combines all the various disciplines in the one area,” said Glenney.

“In one event you get the tarmac racing, gravel, great side by side racing and really good competition. After a five minute race you get out of the car huffing and puffing, that’s for sure.

“It’s exciting to see the names entered for this weekend. Darren (Windus) and I go way back to the RX Challenge days, and it’s great to see his son racing as well.

“There’s some great names and it should be a very challenging and competitive weekend.”

Glenney is set to be joined in the series by a host of new competitors including Victorian father-and-son duo of Darren and Arron Windus.

Both winners of Victorian Rally Championship events, Darren will drive a Mitsubishi Lancer EVO 9, while his son will take over the Mazda 2 that starred at round one in the hands of Michael Coyne.

Ex-pat Irish driver Richie Dalton will join the series in an ex-works VW Polo S2000, the Shamrock Motorsport driver having finished on the podium in ARC events in the past and set to be another outright contender.

Opening round winner Will Orders (Mitsubishi Lancer EVO) and close rival Justin Dowel (Hyundai i30) will both return, as will young stars Sean Bolger and Troy Dowel.

A full entry list will be announced later this week.