Home » News » Supercars » Lowndes: DJR Team Penske in a class of their own

Lowndes: DJR Team Penske in a class of their own 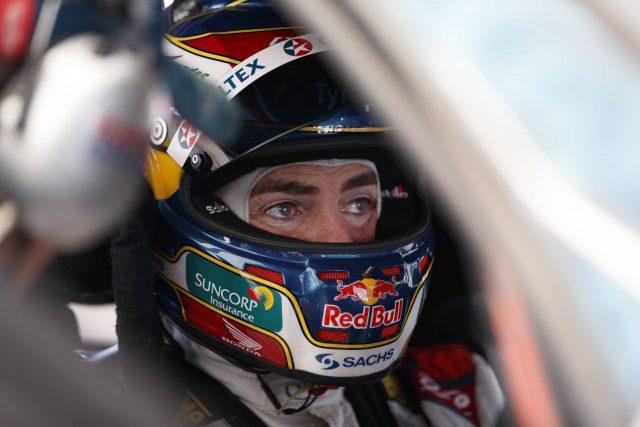 Craig Lowndes says Triple Eight will refuse to give up on its bid to close the deficit to DJR Team Penske following a dominant display from the Ford squad in Perth.

The Supercars fan favourite admits DJRTP is in ‘a class of their own’ currently after the American/Australian alliance scored an impressive double victory courtesy of Scott McLaughlin at Barbagallo Raceway.

DJRTP’s fourth win from eight championship races has helped them to the top of the teams’ standings, confirming the Shell-backed Ford Falcon FG X is the best package on the grid at this stage of the season.

While impressed by Penske’s turnaround, Lowndes is confident Triple Eight will continue to fight hard to reel in the fast Fords.

“I think there is no doubt that they (DJR Team Penske) are in a class of their own at the moment,” Lowndes told Speedcafe.com.

“They have obviously done a lot of research and development over the pre-season and look good on them, there is no doubt that they, and we all said it, were going to be a team to step up in the near future.

“I think the near future has come. They have obviously got a very good package, not only in qualifying spec but in race spec too.

“We will just keep fighting on and changing up and doing things that we can and you know we will go home and obviously analyse what we had at the weekend and work out what we need to go faster.

“For us we will definitely not give up, there is no doubt about that, we will keep fighting to the end.”

After finishing seventh in Saturday’s 120km heat, Lowndes endured a series of issues as he fought back from the rear of the grid to eighth on Sunday.

The 42-year-old suffered an electrical problem which shutdown his Commodore’s engine on the lap to the grid.

As a result, the team started him from the back of the pack.

Lowndes was then turned around by Lucas Dumbrell Motorsport’s Alex Rullo while trying to pit, before suffering a tyre issue midway through the race.

“It is one of those things but we are happy with what transpired after obviously starting from the back, having the issues we did during the race,” he added.

“We had good car speed and it looked after its tyres, so we take a bit out of it.”

Next Story Brabham in talks for LDM Supercars return