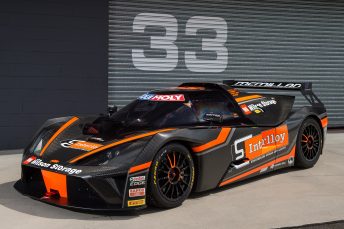 Australian Glen Wood will pilot a KTM X-Bow when the China GT Championship kicks off this weekend at Beijing’s Goldenport Motor Park.

Wood is set for the full six-round season in the GT4 machine with an as yet unconfirmed team-mate at Xtreme Motorsport.

The deal has been put together by M-Motorsport owner Justin McMillan, who Wood regularly partners in Australian GT.

Wood and McMillan gave the X-Bow its Australian racing debut at this year’s Liqui-Moly Bathurst 12 Hour.

“I’m overjoyed to be heading back overseas to compete, and honoured that thanks to Justin McMillan and Reiter Engineering I’ve been handed this fantastic opportunity,” said Wood.

“China is the fastest growing automotive market in the world, and their GT competition is growing too at an incredible rate, with suggestions that the GT field at Goldenport could top 40 cars.”

McMillan, who is the Asia-Pacific distributor for X-Bow manufacturer Reiter Engineering, will be in attendance at Goldenport in the hope of expanding his M-Motorsport business and building connections for further Australian participation in China GT.

“I’d love to be able to join Glen and compete – and that’s a possibility down the track, but I also want to be able to stand back and watch how things unfold and talk with teams,” said McMillan.

“We know the KTM will be quick – we showed that at the Bathurst 12-Hour and the first round of the Australian GT trophy class at Sandown with victory – but it will be good to see how it competes against the likes of McLaren, Aston Martin and Porsche in China.”

The team currently has a vacant second X-Bow available for the next round of the Australian GT Trophy Series at Winton (June 9-11).

Next Story Simmons looks to carry momentum at Silverstone