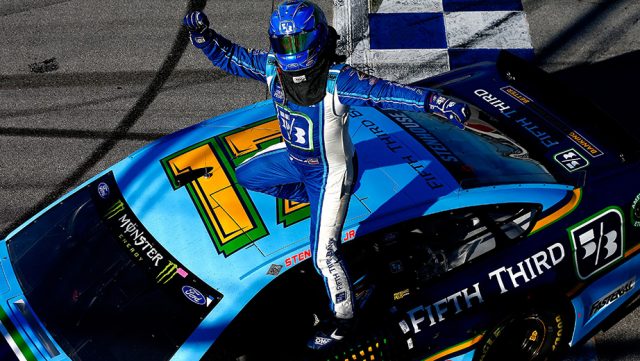 Ricky Stenhouse Jr. has finally broken through for his first win in the Monster Energy NASCAR Cup with victory at the daunting Talladega Superspeedway.

Starting from pole Stenhouse cleared the “Big One” and made a move in a green-white-chequered finish on Kyle Busch to hold-off the field on the final lap of the Geico 500 at Talladega Superspeedway.

In his 158th start in the Cup Series, the 29-year-old also gave Roush Fenway Racing its first victory since June 2014 (101 races ago) with Carl Edwards.

“We’ve been terrible for a long time. This year, every race we’re getting better and better,” said Stenhouse.

“We knew that Talladega was a good race track for us. This Fifth Third Bank Ford was so fast today – qualified on the pole and got the win. It’s cool to have Jack Roush back in Victory Lane. This is cool. The closest race track to my hometown and the fans were out here this weekend.”

Jamie McMurray edged Busch for second, as the winless start to the season for Joe Gibbs Racing continued.

The race itself was a typical Superspeedway encounter with cars and driving working amongst themselves to stay in the lead draft throughout the race. That was until AJ Allmendinger turned Chase Elliott while racing for second place. Elliott’s car turned on its side and Allmendinger flipped upside down as a total of 16 cars were involved in the pile-up.