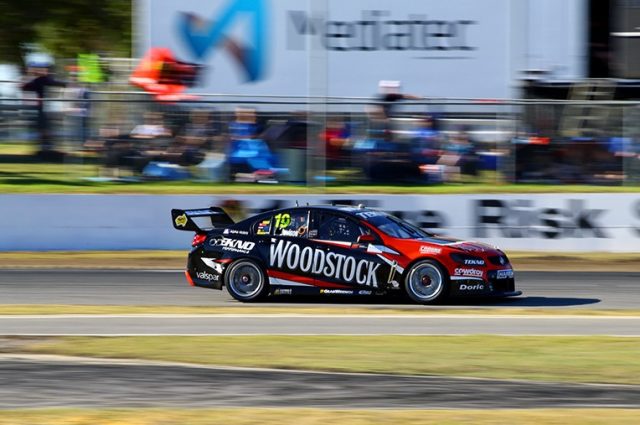 Will Davison has expressed his satisfaction after ending a horror run with finishes of eighth and fifth in the two races of the Perth Super Sprint.

Barbagallo marked the first of four championship events so far this year in which Davison finished both races, let alone doing so inside the top 10.

The embattled driver notably fractured part of a vertebrae in the 12-car pile-up at Symmons Plains, but was also caught up in race-ending incidents in Adelaide and Phillip Island.

In Saturday’s Race 7, however, Davison enjoyed a somewhat steady run to eighth, before a similar race to fifth on Race 8 on the Sunday.

“It’s the first two races all weekend I’ve actually really worked with Adam (Reardon, data engineer) and Campbell (Little, engineer), worked through a strategy, and I’ve had a race, not a fight,” Davison told Speedcafe.com.

“We’ve just had crashed cars and dramas, so it was fun for all of us.

“I think they enjoyed it. It’s the first time they could get their teeth stuck into a bit of strategy and for me it’s the first couple of proper races I’ve had all year.

“I enjoyed myself, I got some points and everyone’s smiling and the car’s straight and now we can hopefully carry some momentum forwards.”

Davison also explained that the team is still coming to grips with a new set-up direction on the Tekno Autosports Commodore.

Since Little joined the Triple Eight customer team as engineer at the start of the season, the Tekno crew has worked to bring its car into closer alignment with the three entries of their supplier.

This challenge has arguably contributed to Davison qualifying deeper in the field, and thus at higher risk of incident, but the 2016 Bathurst 1000 winner hopes that the team has turned a corner.

“The car’s quite different to what I drove last year and we’re trying to find our way in the package,” Davison explained.

“Bingles are a completely separate story, there’s no point over-thinking that, (but) the main thing is to qualify well.

“We weren’t at the start of the year and you get involved in crashes, simple as that.

“We know what we’re capable of – we finished fifth in last year’s championship – and this is more like our style.

“Hopefully we can keep running consistently and then grab some opportunities when they present themselves.”

Davison’s Sunday result came amid a double ailment as he continued to recover from the back fracture, while also suffering burns to his right foot due to heat radiating into the pedal box.

“With probably 30 laps to go as well, probably even more, it was really burning so I was having to accelerate with my heel on full throttle and I was really looking forward to the last pit stop just to get a bit of relief,” he added.

“Fortunately I was in enough of a battle where concentration took over and it hid the pain away, but it was a proper burn.”

The 34-year-old says that while the recovery is progressing well, he still felt the effects of the fracture during the latter stages of Sunday’s race.

“Pretty good,” he replied when asked about how his back felt.

“That was a physical race. That’s 200km around here with no Safety Car and I was feeling it a bit in the last 20 or 30 laps but I didn’t make a mistake.

“From my point of view, I felt like I absolutely maximised every tenth of the whole race and it was quite rewarding.

“I’m not at a hundred percent but I’m into full training now. I’ll have a big week of training before Winton (May 19-21), doing a big 150km charity ride this weekend with (fiancée) Riana (Crehan) and Jamie (Whincup).

“I’m back into full training and enjoying it.”

Davison has now moved up to 19th in the championship having arrived in Perth in 24th position.

Next Story Sepang pushing to host 2018 Supercars round