Cameron Shields has taken another race win and the round win in Round 3 of the CAMS Jayco Australian Formula 4 Championship at Barbagallo Raceway.

Shields led from lights to flag in Race 3 of the weekend, backing up his win in Saturday’s opener, while Liam Lawson won the reverse grid race.

From the outside of the front row, Shields made a slightly better start than pole-sitter Nick Rowe and squeezed the Karratha driver right up against the edge line.

Rowe ran close behind the Team BRM driver until the Safety Car was called on Lap 10 of 16 after Ryan Suhle’s Zagame car incurred a mechanical issue and couldn’t quite roll back to pit lane.

Racing resumed with four laps remaining, when Tyler Everingham took Lawson for third at Kolb Corner, with Josh Denton following him past down the back straight.

Shields put distance between himself and Rowe, who had to concentrate on his mirrors as he kept a fast-finishing Everingham at bay to take second in the race and round.

Earlier in Race 2, Denton headed the field off the line and led all the way until Lawson got by at Turn 1 on the penultimate of 16 laps.

New Zealander Lawson continues to lead the championship ahead of Round 4 at Phillip Island from May 26-28. 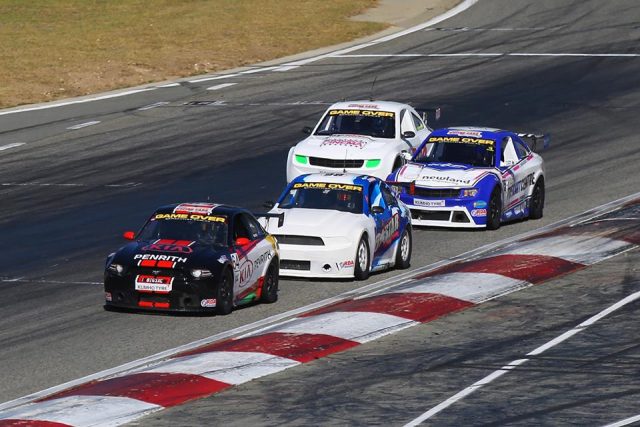 Craig Woods has taken over the Aussie Racing Cars series lead with another race win to conclude Round 3.

Starting Race 4 from pole by virtue of earlier results, the Penrith Kia-backed driver didn’t have things all his own way as Kel Treseder won the start.

An early Safety Car was required when Alex Barboutis didn’t manage to leave the grid, and Jaie Robson soon took over the race lead when green flags flew again as Woods ran as low as third.

Woods, however, got back in front by halfway of the 12-lap affair and was not headed thereafter despite traffic making for a slightly nervous finish.

Robson finished second and James Duckworth third, while Treseder laboured to fourth after folding a guard onto his left-rear tyre due to contact with Robson.

Race 3 had seen a breakthrough victory for Reece Chapman.

The Forster teenager took the lead just after the halfway mark and impressively managed to not only see off a move from defending champion Duckworth, but then also put more margin between himself and Treseder on his way to victory.

The race had come under Safety Car control twice, first when Blake Sciberras and Grant Thompson suffered tailshaft failures on the grid, and then when Craig Thompson made heavy contact with the Turn 2 wall after being tagged by Barboutis at the restart.

Both had to come from rear of grid due to the switch but Gordon finished Race 3 in eighth and Creed ninth in Race 4. 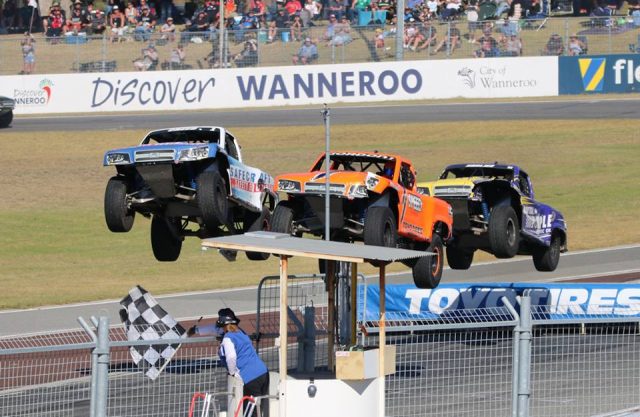 Sheldon Creed pipped Robby Gordon in a thrilling finish to a Race 3 which featured two rollovers.

Craig Dontas was caught in two minds when he approached one of the main straight jumps on Lap 4, putting only two wheels on the ramp and sending truck #45 over.

The roll was his second in as many days.

Travis Milburn was next to end up on his roof when he and Matthew Brabham got hooked together over a jump on Lap 6, Milburn getting pushed sideways and tripping over.

The former NASCAR driver jammed the Speed Energy truck down the inside of truck #1 at the last corner, the pair running side-by-side – and sideways – over the final ramps as Creed won by 0.02s.

The Stadium Super Trucks next support the Detroit IndyCar round from June 2-4.