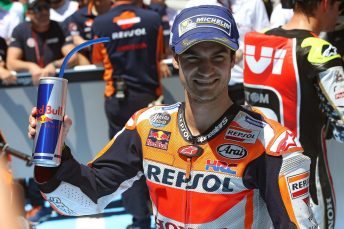 Dani Pedrosa has taken a lights-to-flag victory in the Spanish Grand Prix as Jorge Lorenzo got his first podium for Ducati.

Marc Marquez closed in towards the end but did not seriously threaten his Repsol Honda team-mate, slotting into second in an all-Spanish podium.

Further back, there was a heated exchange between Jack Miller and Alvaro Bautista on Lap 6 when the Australian pushed the Spaniard after they crashed out together.

Pedrosa got the holeshot from pole position and cleared out on a medium compound rear tyre as fellow front row starters Marquez and Cal Crutchlow ran the hard rear.

Johann Zarco was also quick in the opening stages, moving up to third on Lap 2 and then passing Marquez on Lap 4, but Marquez got back in front of the Tech 3 Yahama rider next time around.

Pedrosa’s lead fluctuated until Marquez got it back under a second with three of 27 laps left to run.

However, the pole-sitter responded next time around and Marquez gave up the fight.

Lorenzo made steady progress from eighth on the grid to run fourth after Lap 6.

The three-time MotoGP world champion passed Zarco on Lap 12 and while the Frenchman initially stayed on his tail, Lorenzo gradually edged away.

Zarco would stay fourth while Andrea Dovizioso (Ducati Team) won out in a battle for fifth with Maverick Viñales (Movistar Yamaha).

Valentino Rossi meanwhile laboured to 10th, over 38s behind the winner on his Movistar Yamaha.

Miller made fireworks after he and Bautista went down together at Turn 1 on Lap 6, with the Marc VDS Honda rider responding first by pushing Bautista in the back and then appearing to kick the #19 Aspar Ducati.

Crutchlow, who had been running fourth, crashed his LCR Honda on his own later that lap and also failed to finish.

While the top three in the world standing is unchanged, only two points now separate Rossi from Viñales and Viñales from Marquez, with Pedrosa just six points further back.