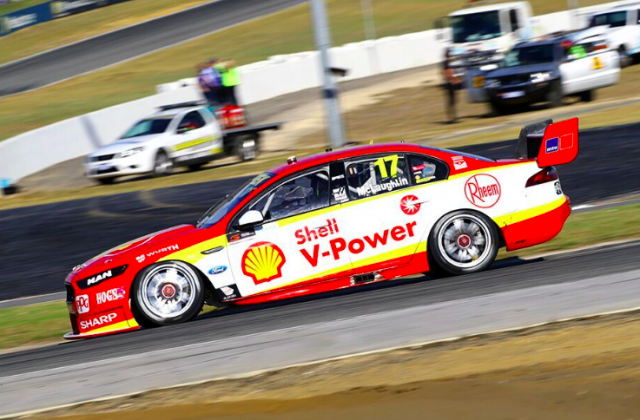 Scott McLaughlin scored his fourth Armor All pole position of the season after edging Prodrive’s Chaz Mostert in a hotly contested session at Babargallo Raceway.

McLaughlin pumped in a record 54.57 effort with six minutes of the 20 minute hit-out remaining which proved just enough to claim pole.

The DJR Team Penske driver jumped out of his car while the majority of the field completed their final runs.

“I was a bit worried but thankfully held onto it. I felt that that lap was basically all I could get out of it, and if anyone could beat me, good on them. I’m stoked,” said McLaughlin.

A flurry of fast times in the dying moments saw Mostert climb to second just 0.04s shy of McLaughlin.

“It is the best the car has felt all weekend,” said Mostert.

“Yesterday didn’t go to plan, the race car didn’t feel quite well and the qualifying car, but the boys did a brilliant job overnight to tidy this thing up and get the car back to feeling like it has the last couple of rounds.

“Overall I’m really ecstatic, Front row feels like a pole position after yesterday, see if we can put a little bit more pressure on those Shell guys.”

Prodrive enjoyed a much stronger showing in qualifying with Mark Winterbottom heading up the second row in third ahead of top Red Bull HRT runner Shane van Gisbergen.

Saturday’s pole-sitter Fabian Coulthard could only manage fifth in the sister #12 DJRTP Falcon.

The Kiwi will share the third row with Jamie Whincup in the #88 Red Bull HRT Commodore.

Prodrive’s Jason Bright produced an encouraging display to secure seventh ensuring three of the team’s Falcons were inside the top 10.

Craig Lowndes was unable to match his Triple Eight team-mates in 18th, while worse was to befall Mobil 1 HSV Racing’s James Courtney, who was mired in 20th spot.

Simona de Silvestro qualified in 22nd position but will be relegated to the back of the grid following her five-place grid penalty.

She will share the final row of the grid with Supercars debutant Matthew Brabham.

“I feel like I am getting the reputation of being the dirtiest driver out there a little bit (she chuckles),” said de Silvestro.

“It was a weird situation I kind of got put in because everyone was kind of slow trying to find a gap.

“I saw Chaz coming with lights but he wasn’t really on a lap.  It is frustrating to get a penalty and things like that.

“I think today the same thing happened to somebody else, so we will see if they get a penalty as well.

“It is what it is, just have to start from the back this weekend and just move forward.”