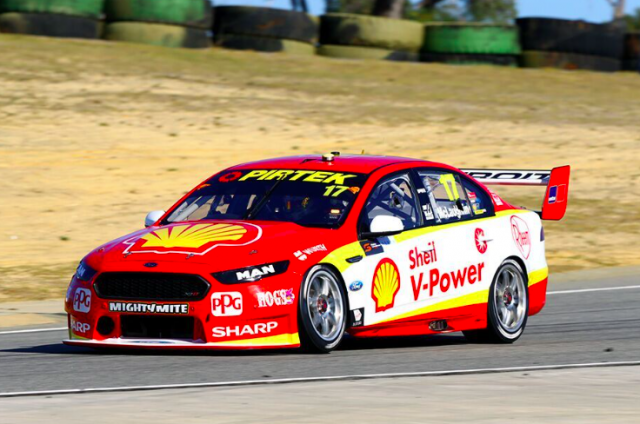 The DJR Team Penske driver was rarely challenged throughout the 83 lap journey as his team executed a slick two-stop strategy at Barbagallo Raceway.

McLaughlin only lost the lead through the pit stop cycles as he showcased impressive pace while preserving his tyres on the abrasive surface.

The pole-sitter led Prodrive’s Chaz Mostert, who started second, to the chequered flag with a 4.6s margin.

McLaughlin’s victory saw the 23-year-old move to second in the championship 31 points behind team-mate Fabian Coulthard.

“To be honest I was pretty nervous about my first races in front of the bosses, but they employed me because they believed in me, said McLaughlin.

“To do it in front of them where they can see it, not just second hand text messages is pretty awesome.”

Red Bull Holden Racing team’s Jamie Whincup made the most of a good start from sixth to claim the final place on the podium, following a strong two-stop strategy.

Mark Winterbottom was able to bring the #5 Prodrive Falcon home in fourth ahead of Tekno Autosports Will Davison.

Coulthard was the first of the three-stoppers to reach the finish in seventh behind Shane van Gisbergen.

McLaughlin managed to get the jump at the start as he led Mostert and Winterbottom, while Whincup just got the better of van Gisbergen for fourth following a heated opening lap tussle.

Coulthard dropped a position to sixth before falling away from the top five in the early laps.

The Kiwi continued to struggle as he fell to eighth behind Jason Bright before ducking into the pits on lap 12.

It proved to be an eventful start for Craig Lowndes who started from the rear of his grid when the engine in his Triple Eight Commodore died going to the grid.

He was then turned around by Lucas Dumbrell Motorsport’s Alex Rullo at the final corner which resulted in a 15 second time penalty for the Perth teenager.

Whincup was the first of the leaders to pit from fourth on lap 24 and he was followed a lap later by van Gisbergen.

Mostert was next to blink followed by race leader McLaughlin a lap later, having built up a five second lead over the former.

Following the round of first stops Cameron Waters assumed the lead having been the first to pit, while McLaughlin held second after being let through by the three-stopping Coulthard.

McLaughlin continued to power on, opening up a five-second lead over Mostert, with Whincup third as the race ticked into the final third.

The Race 7 winner made his final stop on lap 58 and emerged from the pits with a net lead over Mostert and Whincup who pitted slightly earlier.

Once the final stops were completed McLaughlin cooly led Mostert and Whincup to the chequered flag.

Winterbottom salvaged fourth ahead of Davison, while a charging van Gisbergen overtook Coulthard on the penultimate lap to secure sixth.

The race ran without a Safety Car with all 26 cars reaching the finish.