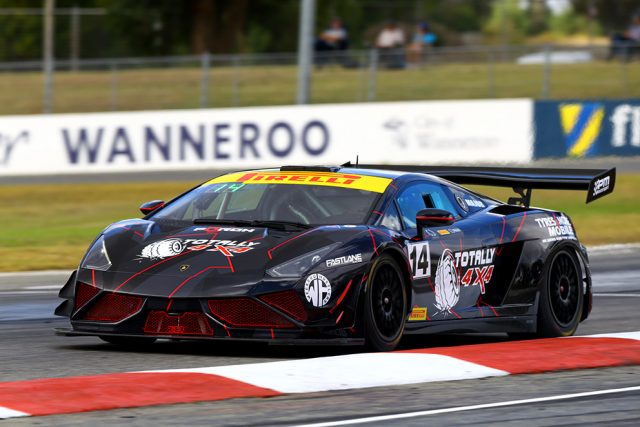 Peter Major has doubled his tally of Australian GT race wins with victory in Race 2 at Barbagallo Raceway.

The West Australian GT rookie was well-placed after the compulsory pit stops before quickly passing Max Twigg and Tony Bates to run away to a 7.0s victory.

The Audi R8s of James Koundouris/Ash Walsh and Geoff Emery/Kelvin van der Linde made up the podium with the professional drivers onboard for a grandstand finish among the minor placings.

Race 1 winner Liam Talbot (#911 Porsche 911) led the field through the opening corners as carnage unfolded behind, necessitating the Safety Car.

The collision is subject to a post-race investigation.

When the race restarted after nearly a quarter of an hour, Talbot disappeared to a five second lead as Fraser Ross held up Max Twigg (#8 Mercedes AMG) in the battle for second.

Twigg took nearly three laps to round up the #59 McLaren 650S, after which Talbot continued to creep away to an 8.4s lead by the time he took his compulsory pit stop just after the half-hour mark.

Major made light work of Twigg before setting off after Bates, who did himself no favours when he ran off exiting Turn 6 and ran through the weeds.

Major needed only another couple of minutes to pick off Bates, even managing a wave out the window as he pulled up alongside at the bottom of the back straight.

While he pulled away, Walsh and van der Linde were busy cleaning up the gentlemen drivers in front.

Bates, who staved off a challenge from Twigg for what was second position at the time, tried to resist Walsh but had to cede with five minutes remaining.

Van der Linde, who Twigg allowed to ease past, faced less trouble passing Bates after the Round 1 winner had another off-road moment late in the race.

The South African was catching Walsh, but ran out of laps and instead stayed on the bottom step of the podium, ahead of Bates, Twigg, Talbot, Richards/James Bergmuller, Jake Camilleri/Mark Griffith (#19 Mercedes AMG), Ross, and Brad Shiels/Andrew MacPherson (#51 Lamborghini Huracan).

Gary Higgan’s and Daniel Gaunt’s Audi R8 did not take to the track after soreness from a qualifying shunt the day prior sidelined the former.

Greg Taylor was also a non-starter after his Audi R8 caught fire in Race 1.

Round 4 will be held at Townsville’s Reid Park across July 7-9.