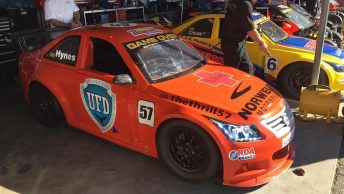 The Bill Hynes entry which Gordon and Creed will drive

Robby Gordon and Sheldon Creed will take over the #57 Aussie Racing Car for today’s two races at Barbagallo Raceway.

In a move brokered by fellow Stadium Super Trucks competitor Bill Hynes, Gordon will take over the United Fiber entry for Race 3, coming up at 1020 AWST (1220 AEST), and Creed will run in Race 4 this afternoon.

The trio will also be in action for the final Stadium Super Trucks race later today.