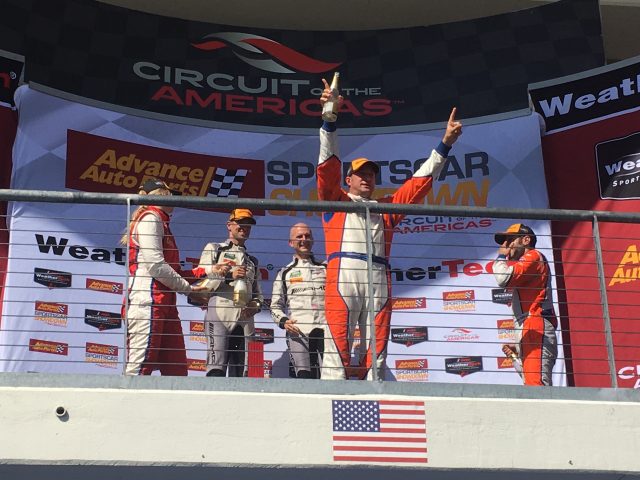 Kenny Habul celebrates on the podium

The SunEnergy1 Racing team of Australian Kenny Habul clinched its second GT Daytona podium of the season in Round 4 of the WeatherTech SportsCar Championship at Circuit of The Americas.

The third place result for Habul and co-driver Tristan Vautier came despite their Mercedes-AMG cutting a tyre early in the race after contact with a Prototype car and dropping off the lead lap, before storming home.

Habul started the race from 11th and was running a solid pace when he came together with Johannes van Overbeek in the ESM Nissan at the final turn.

The former Gold Coast resident made the call to pit as he felt the pressure drop on the right-rear tyre, but the rubber had come away from the wheel by the time he made pit lane.

When Habul handed over to Vautier, the Frenchman joined the field in 15th under yellow and did several laps before the race got under way again with exactly 1.5 hours to run.

Vautier was fortunate to miss the spinning #911 Porsche of Dirk Werner, who was turned around by Jack Hawksworth’s Lexus, just a few laps later.

Hawksworth was issued a drive-through penalty for the incident. 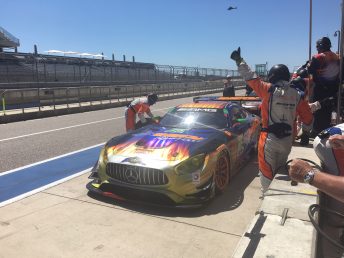 Vautier charged his way through the field and was up to fourth when there was another full-course yellow after the #2 Nissan Prototype of Scott Sharp/Ryan Dalziel caught fire.

With four minutes left on the clock when the race restarted, Vautier wasted no time picking up third place by jamming his car down the inside of Brian Sellers’ BMW at Turn 1.

The 27-year-old was then gaining on the second-placed Ferrari of Christina Nielsen and Alessandro and Balazan, but ran out of time.

“It was a great day in the end,” said Habul, who is now based in Charlotte, North Carolina.

“It seems to be a bit of trend with us with a bit of adversity halfway through. We were in all sorts of trouble after I got hit hard by the Prototype and that cut a tyre down, which caused an unexpected stop.

“After that I just pushed on as hard as I could and was pleased with the consistency of my pace.

“Unfortunately, we went a lap down and when I handed over to Tristan we were 15th and he went out and did what he does best, which is catch them one by one and work his way through the field.

“He absolutely drove the wheels off the car and I am really, really proud of his effort.

“We have a few things to work on like our pit stops, but to have a couple of podiums in the first four races with a brand new team is very pleasing.

“We led the race there at one point as we rolled through the pit stops, but we genuinely had the pace to win and that’s what is exciting.

“We are getting a lot of support from Mercedes-AMG and we are proud of that.

Ben Keating and Jeroen Bleekemolen won the GTD class to give Mercedes-AMG two spots on the podium.

In Prototypes, The Taylor brothers maintained their perfect start to the season with a fourth straight win.

Ricky Taylor cleared out to a healthy lead as he started in the #10 Cadillac, with Jordan Taylor taking it to the line 18s ahead of the rest of the field.

In GT Le Mans, Ryan Briscoe’s race effectively ended at the first corner when he was involved in a five-car crash in the #67 Chip Ganassi Ford GT.

The next round of the championship is in Detroit on June 2-4.