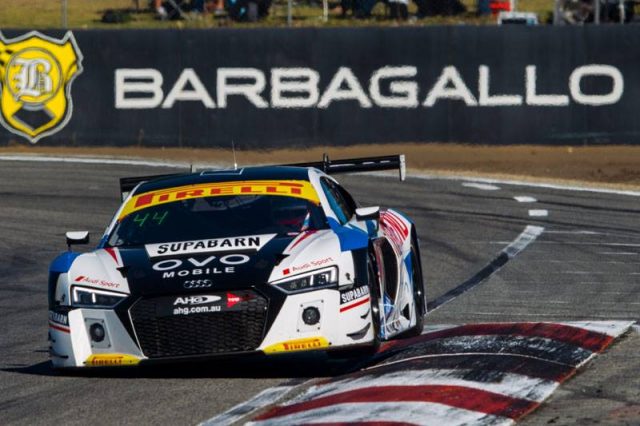 Ash Walsh and Kelvin van der Linde will start on the front row for Race 1 of the Australian GT Championship at Barbagallo Raceway.

Liam Talbot’s 56.7377s lap topped the session but was slower than the #911 Mega Racing Porsche 911 driver achieved in Qualifying 1.

While Talbot was able to claim the top of the sheets this morning, his session was not without drama – starting with an awkward spin on the exit of Turn 1 to see him stranded across the track forcing a number of his fellow competitors into evasive action.

He would rejoin and set his first top time of the session in the very next lap. After setting his second and final fast lap on his fourth rotation, the red flag flew after 7:15s completed for the #124 KFC Audi R8 of Gary Higgan.

Higgan had looped his Audi left out of Turn 4 and struck the wall heavily, forcing a recovery via flat bed which saw the field held under red flag conditions until the end of the session.

They would have just one minute and 45 seconds of green running at the end of the session once Higgan’s steed was cleared away, with it not being enough time to see a change to the running order.

Also coming to grief throughout the session was the pole-sitting Audi with James Koundouris at the wheel. Koundouris lost the rear in the mid-corner of Turn 4 just as the red flag period begun, but was able to gather it up and rejoin without assistance.

The opening race will be held today at 1225 AWST (1425 AEST), with the higher-ranked drivers in each car starting the hour-long affair.

Next Story Talbot wins again in Australian GT at Barbagallo