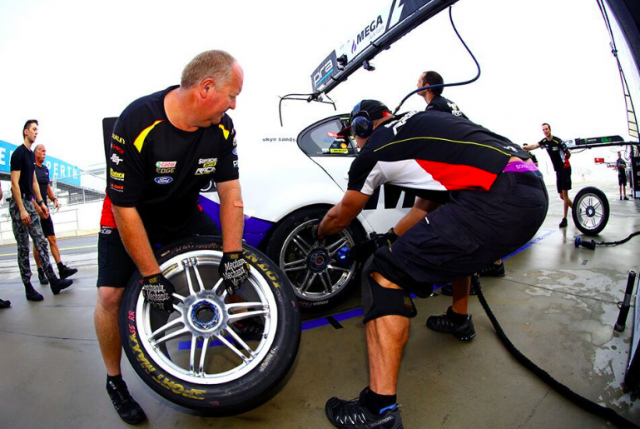 Strategy will be crucial in deciding today’s race

Engineers will be severely tested to ensure correct strategy calls are made with increased tyre degradation set to be a major factor in deciding today’s Perth Super Sprint opener.

A combination of Barbagallo Raceway’s abrasive track surface and Dunlop’s new construction tyres will thrust strategy further into the spotlight this weekend.

However, teams are reporting increased tyre degradation with wear equating to 0.15s per lap during long runs.

These factors ensure making smart calls on strategy will be critical in deciding the outcome of today’s 120km heat.

“The engineers have to get the car right. A poorly handling car will degrade worse than a better balanced car.

“It’s is pretty tough to map out strategy but that is the challenge.

“You have to plan so you do as little on the fly as possible.

“We definitely have to look at it (splitting strategies between the cars).

“If the degradation is worse than previous, then sometimes it gets to the point that there is only one way to do it.

“It is open. When there is this much degradation you don’t have to be that much better than the competitor for it to make a tangible difference.”

Last year Craig Lowndes pulled off a bold two-stop strategy to scythe his way through the field to victory as he took advantage of the abrasive surface.

The Triple Eight driver was aided by the fact the race started in wet conditions which freed up the team’s slick tyre stocks.

A repeat of such a strategy is thought unlikely given the teams being limited to 20 tyres for the two races.

“We don’t have enough tyres for Sunday if we two stop on Saturday,” Tander told Speedcafe.com.

“Everyone is a bit boxed in which is a shame because we saw some pretty exciting stuff last year because people had tyres available.

“If another set of tyres was allocated for this weekend you would have seen some pretty different strategies.”

Following the issues experienced at Phillip Island, he has been encouraged by the performance of the rubber in Perth.

“They (the teams) have got 20 tyres after the hand backs for the two races so it will be case of a look and see,” Fitzsimons told Speedcafe.com.

“There is a good haul of points available for someone to roll the dice.

“Guys may sacrifice Sunday to two stop on Saturday. The wear rate is what everybody is measuring frantically.

“It will very much be a race where you drive with your head, while qualifying is going to be absolutely critical.

“I’m quite happy with everything I’ve seen so far and everybody seems to be behaving themselves (with regards to set-ups).

Teams will have one final 45 minute practice to gain data ahead of qualifying at 1155 and Race 7, which is scheduled to start at 1445 local time.