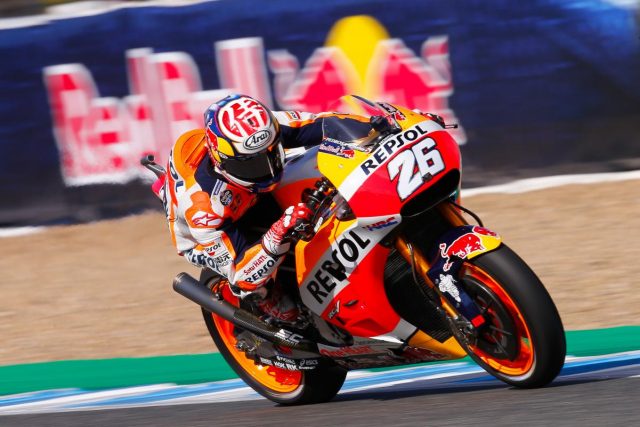 Dani Pedrosa has backed up his practice dominance with pole position for the Spanish Grand Prix in Jerez.

Pedrosa, who had finished fastest in each of the first three free practice sessions, bumped his Repsol Honda team-mate Marc Marquez off pole in the final minute of qualifying, while Cal Crutchlow made the front row a Honda sweep.

Andrea Iannone and Aleix Espargaro came through Q1, but the works Ducati Team’s Andrea Dovizioso could only qualify 14th.

In Q2, Marquez laid down an early marker with the fastest lap of the weekend on his first flyer.

Pedrosa was on to eclipse 24-year-old with his first effort but made a slight error and instead stopped the clock a quarter of a second adrift, before closing the margin next time around.

Marquez opted for a two-stop strategy but failed to make any impact during his middle run.

Crutchlow moved up from seventh to third in the 14th minute of the quarter-hour Q2 session, relegating Movistar Yamaha’s Maverick Viñales to the second row.

Pedrosa then went top with a 1:38.249s, 0.051s faster than Marquez, but faced a nervous final few moments as his team-mate went after pole.

Marquez pushed hard but got slightly ragged through Turn 11 and ended up practically matching his existing personal best, leaving Pedrosa with a first pole in 23 races dating back to Malaysia in 2015.

Crutchlow, who pulled off late in the session when he was stung by an insect which had found its way into his leathers, was typically forthright after going fastest to the third sector on his best lap.

“It was disappointing to lose in the last sector,” said the LCR Honda rider.

“We’re happy enough and we have to continue like this (but) we’re wasting time testing things for Honda. We’re not making the best setting in the bike for this.”

In an encouraging sign for the new Ducati recruit, Lorenzo was second-fastest on combined practice times.

Jack Miller, who finished second in Friday practice, went directly into Q2 and starts 10th, despite a late fall on his Marc VDS Honda.

Aleix Espargaro also went down at Turn 2 on his Gresini Aprilia and will start twelfth, next to Pramac Ducati’s Scott Redding.

In Moto2, Remy Gardner qualified 28th of 32 riders on his return from injury.

The Spanish Grand Prix will be run over 27 laps from tomorrow at 2200 AEST.