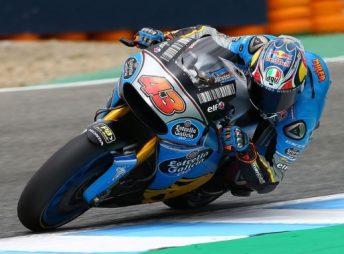 Jack Miller has made a strong start to Round 4 of the MotoGP world championship at Jerez, finishing second-fastest after Friday’s two free practice sessions.

Dani Pedrosa was all but untouchable on his Repsol Honda lapping the 4.42km circuit more than 0.5s faster than the rest of the field, but Miller was next-best as Hondas swept the top three.

Free Practice 1 was run in wet conditions, with Pedrosa on top with a 1:51.648s ahead of Cal Crutchlow and Miller.

The same three men finished on top of the timesheets after Free Practice 2 with just the minor placings swapping.

“I felt really comfortable on the bike in the wet this morning (FP1) and was happy to be battling inside the top three,” said Miller.

“The start of this afternoon’s session was a bit tricky because there were still quite a few damp patches around, but at the end it was completely dry and I was happy with my lap time. I did a 1’39.964 and that’s my best lap here at Jerez.

“I’ve got some great feeling from the front end and I can put the bike where I want to without being too close to the limit.

“It’s a brilliant way to start the weekend and hopefully we can build on this for a strong result on Sunday.”

Jorge Lorenzo was on for a sensational result aboard his Ducati, leading with just a few minutes remaining before finishing fourth.

Valentino Rossi was 12th on the timesheets with Marc Marquez another two positions further back having not attempted a run on soft tyres.