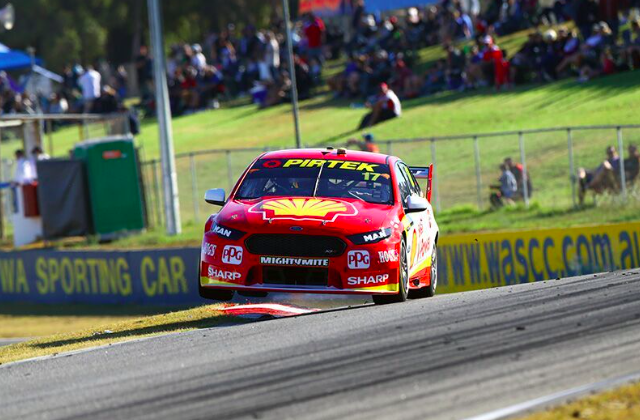 Scott McLaughlin claimed his first points paying win for DJR Team Penske as he headed Fabian Coulthard in a dominant display for the team in Race 7 at the Perth Super Sprint.

McLaughlin managed to make the jump on his pole-sitting team-mate Coulthard which set the tone for the remainder of the 50 lap race.

The Kiwi managed to maintain the advantage after the flurry of pit stops while preserving his tyre life to lead Coulthard home in front of Team Penske boss Roger Penske.

The Red Bull Holdens proved the best of the rest with Jamie Whincup coming home in third 7.4s adrift of McLaughlin, while van Gisbergen finished fourth.

“The car was fantastic. I heard Ludo there and I thought he said ‘pit’ and I don’t think he meant it so we’re going to have to get my Frenglish better so we’ll work on it,” said McLaughlin.

“It’s just been amazing and to do it, one-two, in front of Roger (Penske) is pretty cool too, so having Fabs alongside me is a great start to the year.

“It’d be nice (if Roger Penske came to every race) but he’s got a busy schedule.”

The DJR Team Penske flew out of the blocks with McLaughlin leading Coulthard on the run to the first corner.

After surviving an investigation into a possible jump start, McLaughlin and Coulthard bolted away from the Red Bull HRT duo of Shane van Gisbergen and Jamie Whincup.

The Shell Ford set a blistering pace as the entire field toured under the race lap record at the venue.

McLaughlin managed to open up a two second gap from Coulthard as the DJRTP duo were more than seven second clear of the Red Bulls of Whincup and Van Gisbergen, who were pursued by Prodrive’s Chaz Mostert and Mark Winterbottom.

The reigning champion allowed Whincup through to third having struggled for pace in the early laps.

Coulthard was the first of the DJRTP cars to pit having dropped three second adrift of McLaughlin who pitted a lap later.

McLaughlin emerged ahead of Coulthard following the stops while Whincup slotted into a net third ahead of charging Mostert, who was the first of the lead group to pit on lap 21.

Van Gisbergen briefly dropped behind Erebus Motorsport’s David Reynolds and Will Davison (Tekno Autosports), before fighting back to climb back to a net fifth.

At the front McLaughlin was unable to move away from Coulthard with just 0.7s separating the pair following the stops.

Whincup was unable to make any serious inroads on the Fords ahead but was able to pull away from Mostert who fell into the clutches of van Gisbergen.

As the laps ticked by van Gisbergen moved ever closer eventually passing the Falcon for fourth on lap 44 at the final corner.

After pitting later than the rest of the front runners, Winterbottom made use of his fresher tyres to climb through the ranks to claim fifth as Mostert slid to sixth.

Craig Lowndes was among those to benefit from better tyre life in the closing stages as he surged to seventh by the chequered flag.

The top 10 was completed by Garth Tander (GRM) who headed Todd Kelly (Nissan Motorsport) and James Moffat in the sister GRM Commodore.