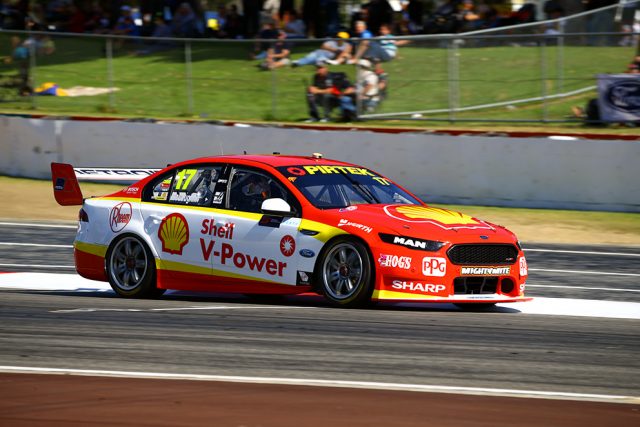 The Kiwi stopped the clock with a 54.68s to surpass the previous fastest ever lap at the venue set by Shane van Gisbergen in Friday’s second practice.

McLaughlin focussed on long runs earlier in the session before completing a qualifying simulation in the final moments of the 45 minute session.

“The car was a lot better than yesterday and we got our phasing right with the new tyre,” said McLaughlin.

“I learnt a lot with Fabs (Fabian Coulthard) next to me so thanks to him, but we have two strong cars heading to qualifying that is for sure.”

Mark Winterbottom bounced back from an eventful session to end up second just 0.10s adrift of the #17 DJR Team Penske Falcon.

Winterbottom suffered a left rear broken suspension arm midway through the hit out.

“We were trying to do race runs again, because you put the tyre on and just go one and a half seconds quicker it just makes a massive difference,” said Winterbottom.

“We tried to focus on the race run, had a set back there mid-session, then at the end tried to go back to a quali car.

“It is pretty close, we can do it comfortably, just a little bit of understeer in the middle of the corner is costing us time.

“We have strengths which is nice, just have to tune up the weaknesses and not lose too much of the strengths that we have got, pretty happy but a little bit of speed to come hopefully.”

Chaz Mostert was fifth fastest but was involved in an incident towards the end of the session.

The Supercheap Auto racer was forced to brake hard behind James Moffat, who was warming up his tyres on the back straight.

As a result, a fast approaching Jamie Whincup had to take evasive action to avoid car #55.

The Red Bull HRT driver was top briefly but his time was taken away for exceeding track limits.

“I just got choked up with another car in front and yeah didn’t even see Jamie coming that quick, trying to focus on what is going on in front of me. (As a qualifying car) it is pretty ugly at the moment, we have a bit of work to do.”

Meanwhile, Brad Jones Racing’s Tim Slade was forced to miss the majority of the session after suffering an engine failure.

His team face a race against time to fit a new engine in the break before qualifying this afternoon.

“We have got an engine drama,” said Slade.

“I think its terminal so that is us for this session. Hopefully we can get it fixed for qualifying.”