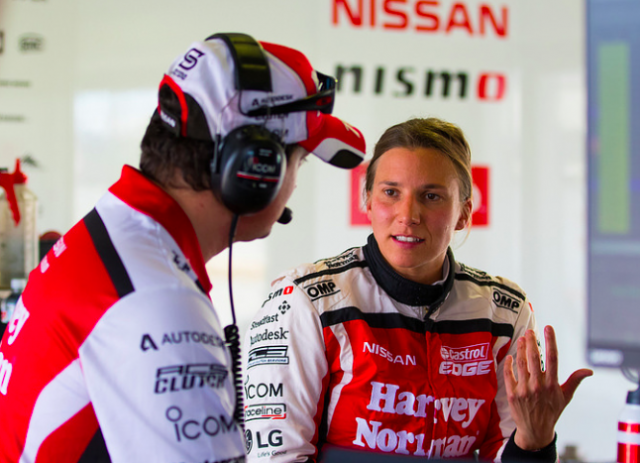 Stewards have issued a five-place grid penalty for Sunday’s race to Simona de Silvestro after impeding Shane van Gisbergen and Michael Caruso during qualifying at the Perth Super Sprint.

Officials investigated an incident that saw van Gisbergen and Caruso forced to take evasive action after coming across three slow moving Nissan Motorsport Altimas who were on the racing line on the entry to Turn 7.

Rick Kelly, Todd Kelly and de Silvestro were all preparing for a flying lap while van Gisbergen and Caruso rapidly closed on the cars during their own flying laps.

As a result, van Gisbergen narrowly avoided a crash after swerving onto the grass before running through the sand trap.

The issue sparked calls from Triple Eight team manager Mark Dutton for those responsible to be disqualified from the session.

Stewards initially electing to look at the incident after qualifying but instead chose to complete the review after the race, ensuring the grid for Race 7 remained unchanged.

The grid penalty for reckless driving, to be served in Sunday’s Race 8, will come as a blow to de Silvestro, who has shown impressive pace at Barbagallo Raceway, resulting in a career best 14th in qualifying.

Speedcafe.com understands a special drivers’ briefing has been called for Sunday morning where qualifying protocol is expected to be discussed.

Stewards also confirmed that Scott Pye has been relegated to 20th behind Cameron Waters for exceeding track limits on the run to the chequered flag.

Next Story BRABHAM: Hungry for more after first Supercars race