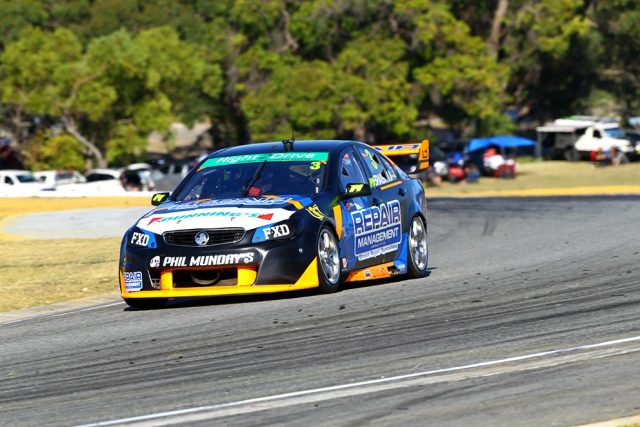 My first race in a Supercar was awesome fun. I loved it out there.

I just loved the competition and it’s definitely one of the most competitive series in the world, so I just love coming over here, seeing all the guys that I grew up racing with, and being able to compete with them.

Today was obviously a huge learning curve for me. I had a lot to learn and jumping in cold turkey is usually not the way to go, but that’s the opportunity I received and I had to jump on it with everything I had.

It was a successful day but it’s made me so much hungrier to do well tomorrow because I think I’m right there. I can compete with these guys and it’s just a matter of getting those last few little bits together to get track position and move up through the field.

At the end of the race I was running right with the leaders’ pace. While I was a lap down, I had the same speed as all the guys up front and my tyres were obviously a little bit better than theirs because I pitted later but I could run with them.

Unfortunately, I definitely didn’t make the most of qualifying. That was the first qualifying run I’ve ever had in the car and I’m just about there, but I need to learn how to get the most out of the car.

Obviously, I’m more experienced now and I know kind of how qualifying goes down so hopefully I’ll have a better shot at it tomorrow, get some good track position, have another clean race, and see where it plays out.

At the moment, it’s just about getting laps under my belt. If I’d had a test day, done some Super2 races, and been well-prepared, then I’d be a lot more confident to be aggressive out there and really show them what it’s got. With me just jumping in cold turkey, I’m just trying to feel comfortable in the car first and not ruin anyone’s race while I get laps under my belt.

Once I get the experience I need to push forward, then I’ll have a real good go and start really racing hard and door-banging with these guys.

The problem today was that I wasn’t aggressive enough at the start. I don’t think my team-mate Alex Rullo or I did the best job we could have because in the race we definitely weren’t the slowest cars.

I felt that when everyone started going off with their tyres that I was a lot better off at the end of the stints than everyone around me.

If I was a little bit more aggressive at the start, I could have kept moving up the field. Even though both of us were a little bit off in qualifying, that wasn’t really reflective of where we were at.

The weekend has also been a huge physical and mental struggle, switching between the Supercar and the Stadium Truck. I’m doing more laps than the other guys, it’s a lot more physical, and I’m definitely trying to do everything I can with my diet to stay on top of it.

So far I’ve been okay. I felt great in that race, I think that first day is always the hardest and then your muscles start getting used to it, and I feel good now.

I’ve still got a lot more to go tomorrow so we’ll see how I feel then. I’m sure I’ll feel dead, but so far so good.

Next Story Penske expects Falcons to continue in 2018