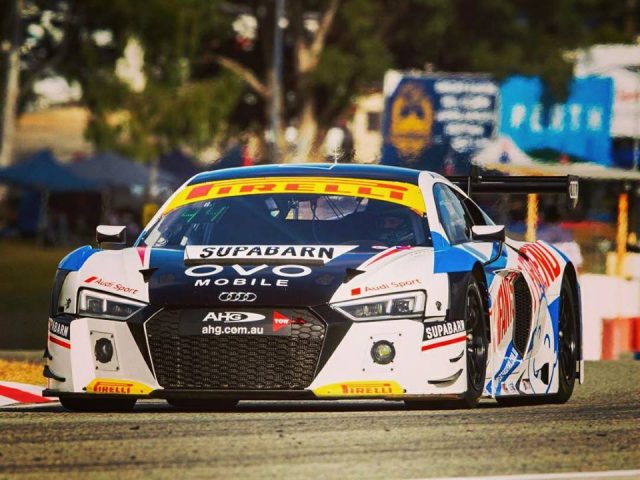 Ash Walsh sits on provisional pole for Round 3 of the Australian GT Championship at Barbagallo Raceway.

Walsh broke the streak of Kelvin van der Linde, who took the first two poles of this season, but is set to share the front row with the South African pending results in Qualifying 2 tomorrow.

Neither of the Audi R8 drivers left the pits immediately, but Walsh made a serious mark on the session when he took his #44 Supabarn entry to the top on his first flyer.

He improved his own benchmark shortly before the halfway mark of the 20-minute qualifying session, and remained there for the duration.

Van der Linde ran a different approach in the #74 Jamec Pem entry, waiting until 10 minutes in to even join the session, hoping to gain an advantage from rubber already laid down.

The factory Audi driver, however, ruined his first flyer when he ran wide at Turn 1, and was only good enough for fourth-fastest on his next two attempts.

Nevertheless, he eventually did enough to grab what will likely remain a front row berth with the lower-ranked drivers to run in their respective cars in Qualifying 2.

Daniel Gaunt made it three Audis in the top three with his early effort in the #124 KFC entry, while West Australian Peter Major put in a strong performance on his home track to be fourth fastest in the #14 Lamborghini R-EX.

There was a clash late in the session between Richards and Tony Quinn at Turn 1.

The latter was exiting pit lane in his McLaren 650S when the former appeared to run wide and make contact, with Quinn unable to get himself off the bottom of the timesheets thereafter.

The starting grid for Race 1 will be finalised with another qualifying session tomorrow at 0840 AWST (1040 AEST).