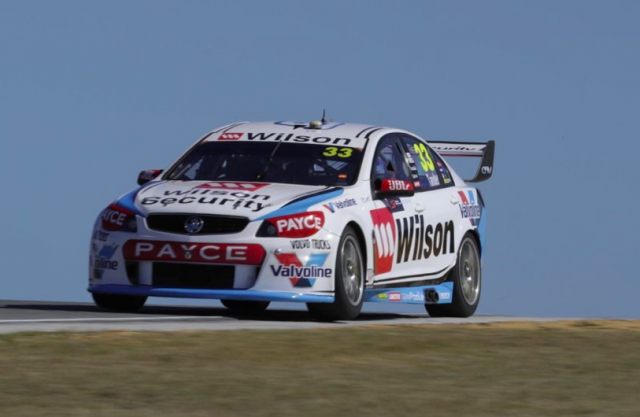 The Garry Rogers Motorsport driver made the most of a late run to move to the top of the timesheets with a minute remaining.

The six-time champion had topped the 45 minute session heading into the final moments.

“I sort of had a feeling our car would be better here than it was at Phillip Island,” said Tander.

“It was a really productive session, it is hard to know where you are in the middle of the session because the tyre falls away so quickly, and then you put on a fresh tyre at the end and it is like you have won lotto.

“I don’t think the lap was particularly great but we found out a few other guys ran greens so that is encouraging.

“It is only practice one, considering where we have been and where are up to, that’s not too bad.”

Garry Rogers Motorsport backed up its pace with the sister entry of James Moffat climbing to third.

Mobil 1 HSV Racing’s James Courtney was among a group of drivers to improve late in the running as he slotted into fourth.

Rick Kelly proved the top Nissan runner in fifth having enjoyed a spell at the top of the times earlier in the hit-out.

Running in front of team Penske boss Roger Penske, Fabian Coulthard had set the pace at the halfway point in the #12 DJR Team Penske Ford before slipping down to sixth at the chequered flag.

His team-mate Scott McLaughlin struggled to match the pace with the Kiwi ending up 20th in the results.

The #17 Ford found found himself caught up in traffic in the closing stages that saw him cop a hit to the rear of his car from Nick Percat.

“I think Nick (Percat) and Scott Pye have got some sort of issue but I was on a race run and in practice obviously you just try and do your own session,” said McLaughlin.

“I was trying to do my best not to stuff too many people up but I also want to get a good program for myself.”

Dale Wood continued Erebus Motorsport’s strong recent showing in seventh ahead of Craig Lowndes and team-mate David Reynolds, who endured a small run off at the final corner early in the outing.

The top 10 was completed by Brad Jones Racing’s Tim Slade ahead of reigning champion Shane van Gisbergen and Will Davison.

Supercars debutant Matthew Brabham impressed on his maiden outing in a V8 Supercar as he ended the session in 25th, just 1.8s adrift of the pace.

Brabham clocked the most mileage with 32 laps in the books as he acclimatises to the #3 Lucas Dumbrell Motorsport entry.

“It was awesome, it is a great car, I obviously had no idea what to expect, having never driven one before so it was just a matter of getting some laps under my belt, feeling comfortable and building up speed,” said Brabham.

“It felt all right, I have no idea of where I need to improve on, obviously I am pretty much in the dark, but it felt good.

“I think just getting comfortable. Obviously a lot of guys when they jump in they have testing or development series to get them into the car and I have gone in cold turkey.”

The Supercars will return to the track for another 45 minute practice session scheduled for 1435 local time.