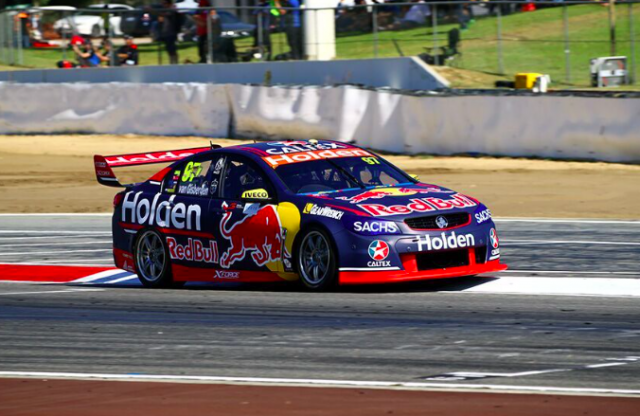 Shane van Gisbergen posted the fastest ever Supercar lap at Barbagallo Raceway to top the second practice session at the Perth Super Sprint.

The reigning Supercars champion saved this best for the final moments to jump from 23rd position the top with a blistering 54.77s effort.

Van Gisbergen’s time eclipsed the DJR Team Penske Falcon of championship leader Fabian Coulthard, who was the first to post a lap in the 54s bracket.

In the end, the New Zealanders were split by just 0.01s when the chequered flag flew after 45 minutes of running.

“He gives me no tyres all day but we put some good ones on and we were flying.

“The car felt terrible but we were chipping away, bolted a new set on and found two seconds suddenly.”

Red Bull HRT’s Jamie Whincup came through in third having topped in the times late in the session.

Prodrive’s Mark Winterbottom saved his best for the final run to end up fourth in the #5 Falcon ahead of team-mate and Phillip Island Race 6 winner Chaz Mostert.

Craig Lowndes enjoyed a spell at the top of the times shortly after suffering a spin at Kolb corner.

Opening practice pacesetter Garth Tander could only manage 19th, while DJR Team Penske Scott Mclaughlin was just outside the top 10 in 12th spot.

The session was brought to a halt at the halfway point when the Perth native Alex Rullo became stranded in the gravel trap at the final corner.

The 16-year-old locked up the brakes forcing the Lucas Dumbrell Motorsport driver deep into the corner.

Rullo was involved in a closely fought skirmish with Whincup prior to the incident.

The Perth schoolboy ended the session in 24th ahead of Dale Wood and debutant Matthew Brabham in the #3 Lucas Dumbrell Motorsport entry.

Supercars will contest a final 45 minute practice session on Saturday ahead of qualifying and Race 7 (120km).